Which top 3 NZX stocks are trading under NZ$1?

Penny stocks are high-risk and high-reward investments. Companies that issue them may grow into big corporations with above-average revenues, or they may fail pathetically in their early years, leading to massive losses.

Let’s have a look at 3 NZX stocks that are trading under $1. 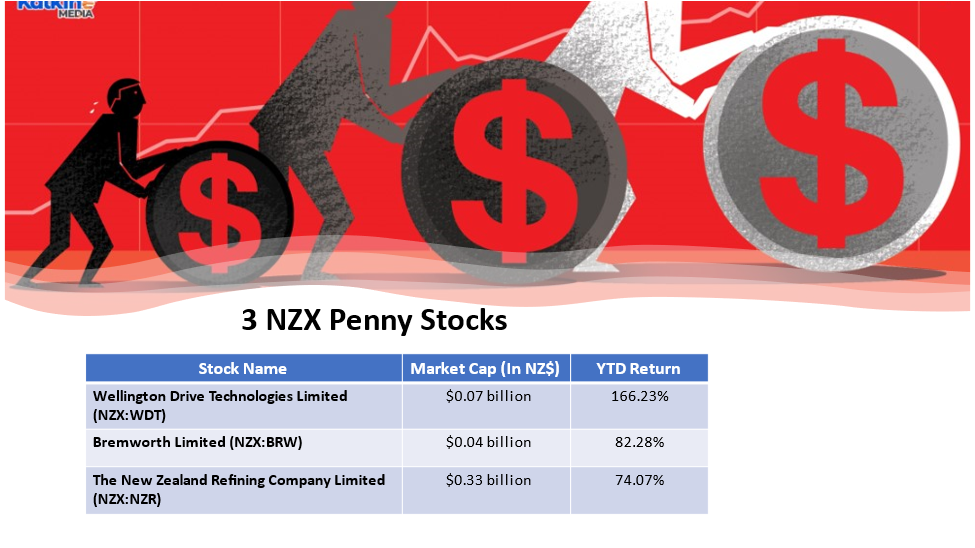 High-efficiency motors supplier and IoT solutions provider, Wellington Drive, notified in a trading update on 15 December that it anticipated revenue to be nearly US$47 million and an EBITDA of roughly $3.9 million for FY21 in spite of being affected by production limitations and increased costs.

RELATED READ: Why to explore 5 NZX technology stocks ahead

The Group appointed David Burden as its Chief Customer Officer. WDT expects its revenue to be roughly US$60 million in FY22 and the resulting profit will be reinvested in developing infrastructure and expanding staff and infrastructure.

Bremworth, a renowned carpet and flooring manufacturer, made aggressive moves in FY21 to implement its all-wool and natural fibres plan.

RELATED READ: Are there any NZX shares to be explored under NZ$1?

Due to its decision to abandon synthetics, the Group's revenue fell 5% in FY21. Wool carpet sales, on the other hand, grew rapidly in H2 due to strong consumer demand in New Zealand and Australia.

BRM has a strong balance sheet and is well funded to carry out its five-year strategy.

NZ’s sole oil refining company, NZR, reported RAP throughputs of 1.6 Mbbls in September/October 2021 because of Auckland's Level 4 and Level 3 lockdowns, and this was 37% lower than the same time the year before.

ALSO READ: How have 5 NZX financial stocks performed in 2021?

Furthermore, the Group has raised about $48.5 million in new stock, including a $39-million placement of extra shares last month, to fund private storage facilities and those under discussions.

Penny stocks are low priced but carry risk and volatility.