Infrastructure stocks are the backbone of an economy. They play an instrumental role in the faster economic growth as they help to lay down the necessary structure for road and rail transport, airports, power, energy, data, and communications, etc., within the country. 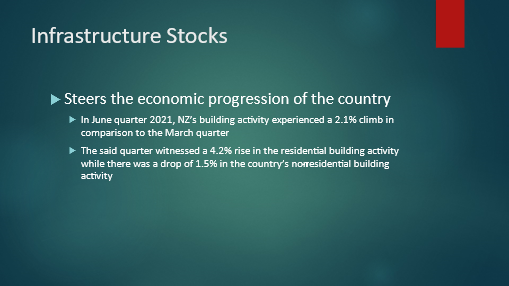 As per Stats NZ, in the June quarter of 2021, New Zealand witnessed a growth of 2% in its building activity in comparison to the March quarter, driven by a 4.2% climb in the country’s residential building activity.

Also, the recent lockdowns did not have much influence on the June 2021 results, however, the impacts are likely to be experienced in the results pertaining to the September quarter.

It is pointed out that in the March and June 2020 quarters, the volume of building work saw a slump owing to the pandemic-related alert level changes. However, the building work bounced back with improved economic conditions.

With this background, let us take a look at the five NZX-listed infrastructure stocks.

Due to prevailing uncertainties pertaining to COVID-19, the Company would hold a virtual meeting on 30 September.

Fletcher Building Limited operates major construction and infrastructure projects across the country. The Company will distribute 18.0 cps as a dividend on 17 September, thus taking FY21's total dividend to 30.0 cps.

Interesting Read: Do these 5 NZX mid-caps have the potential to become large-cap stocks?

NZ’s famous glass supplier, Metro Performance Glass Limited, has recently announced the resumption of its operations in the country, following the federal government’s declaration of dropping the alert level from 4 to 3 for regions outside of Auckland and Northland.

However, the Company's Auckland-based plant would remain closed until the city's alert level drops to 3.

On 9 September, Metro Performance Glass traded flat at NZ$0.440, at the time of writing.

Resolutions were passed related to the re-election and election of Directors as well as allowing the Board to fix the auditor’s remuneration.

As a result, SMW has made significant structural changes to reduce its cost structure.

Looking ahead, the Group has enhanced skill sets of its employees and improved service offerings to its customers, to maintain a strong market position.

At the time of writing, SMW Group remained unchanged at NZ$1.00 on 9 September.

Do Read: How Did The 4 NZX Stocks Perform In Financial Results - GSH, SMW, GEO, TGG?

Infrastructure stocks lay the foundation for the growth of the modern economy, hence investing in them is rewarding in the long term.