As the market players know, the outbreak of the coronavirus pandemic has impacted numerous sectors as well as industries. The performance of various companies were also impacted. This was witnessed because lockdowns were announced in order to restrict the spread of the deadly virus. However, there are expectations that now the companies are expected to perform well. This company is from the logistics space and has reported robust results for FY 2021. This company has also encountered rise in the operating cash flows in FY 2021. This company’s stock price rose by ~55.09% in 9 months. Also, over the time span of 6 months, the stock rose by ~42.59%.

Mainfreight Ltd (NZX: MFT) is engaged in the business of providing complete end-to-end supply chain logistics solutions. It is engaged in offering international as well as domestic freight transportation and managed warehousing and everything in between. With team as well as branches across The Americas, Asia, Australia, Europe, and New Zealand, the company’s network of passionate team members would be working together in order to design an effective supply chain solution so that the business needs are suited.

Do Read: What does Mainfreight (NZX:MFT) do? Is it based in NZ?

MFT, on 15 July 2021, has appointed Jason Braid as a regional manager for the Americas. He will replace John Hepworth who has decided to retire from the business effective 30 September 2021. Jason has been working in the company across various sales, operational, and management roles for more than 20 years in diverse parts of the business. 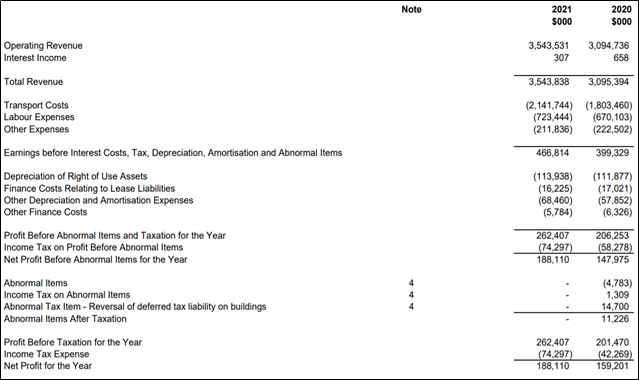 Considering the robust performance amidst the difficult operating conditions globally, as well as in line with the profit improvement which was achieved, the company has stated that the discretionary profit bonus increased to $43.88 Mn, up 60.8% from $27.29 Mn for the previous year.

Do Read: How are NZX logistics & freight stocks coping with level 4 lockdown?

MFT is developing a global business capable of delivering supply chain logistics services for its customers globally that will stand at par with the larger global players.

The company believes that the heavily inflated shipping and air cargo rates would continue to be the feature of the global trade and the freight demand is surpassing air as well as sea capacity.

The company is confident of delivering sustained improved results in the near term. This is because, in the first 7 weeks of trading into the FY 2022, the company has witnessed same activity levels as those of the previous 6 months.

MFT has stated that growth in the Asian business supported it to the satisfactory result, and profit and sales revenues rose significantly, by 108% and 70%, respectively. Notably, rate increases from air as well as sea freight carriers had an influence on the increase in revenue. However, the company has also improved its market share. The company is witnessing revenue improvement throughout its wider Asian branch network. MFT has also stated that it is primarily focused towards increasing the imports into the region from the balance of the global network, which would also be supporting its efforts to develop the warehousing services in the Asia region.

The company has stated that its businesses outside NZ are contributing more than 76% of the sales revenues as well as more than 63% of the net profit. The company stated that it would be releasing its financial results for H1 FY 2022 to the market on 11th November 2021.

Please Read: Why are these 5 most discussed stocks on the NZX?