As the market participants are aware, the global economy witnessed the significant disruption as a result of the outbreak of the COVID-19 pandemic. In order to restrict the spread of COVID-19, several lockdowns were imposed and, as a result, the operations of several companies were impacted. However, now some companies and sectors are expected to perform well. This company has recently reported decent results for the year ended 30th June 2021. Amidst challenging environment, this company has managed to report growth of 61% on the YoY basis in FY 2021 in its trading profit after tax. The stock price of this company rose by ~16.66% in 6 months. In the time frame of past 1 year, it increased by ~33.92%.

The Colonial Motor Company Ltd (NZX: CMO) happens to be the company owning the motor vehicle dealerships. The company also has dealerships selling heavy trucks as well as tractors. The current major shareholdings in the company are with individual members of the Gibbons Family, who are collectively holding more than 60% of the shares of the company. 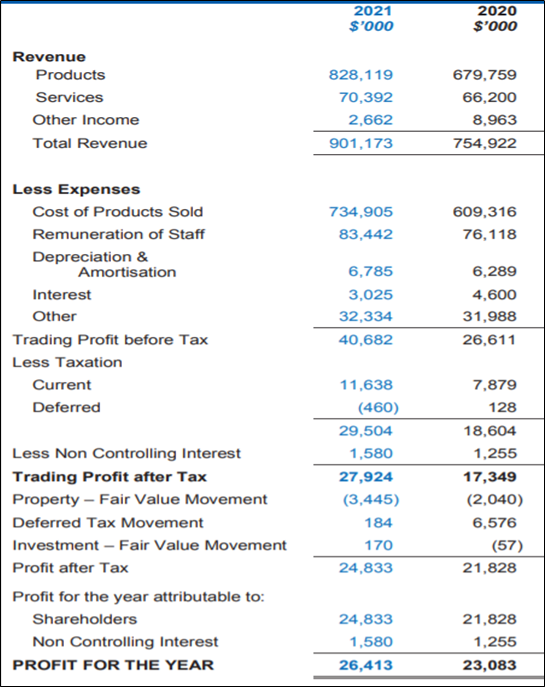 Do Read: Why Are These 5 Stocks Making A Splash On NZX- MOA, CMO, PGW, CGF, SKT?

The company’s board confirmed that, on 11 August 2021, Gillian Durrad Watson was appointed as the director of CMO effective from 1st September 2021.

The company has stated that Jim Gibbons would retire from the post of Chairman of the CMO in November. Meanwhile, the directors of the company have selected Ash Waugh to the Board position of Chair Elect.

Information About the Cash Flows

The company stated that its total revenue rose by 4.6% as compared to the same period last year and most of the growth was witnessed in the last month. The Directors of the company have declared the fully imputed interim dividend of 15 cps.

In  the release it was mentioned that the new vehicle market for full calendar year witnessed the fall of 22% as compared to the previous year. However, that disguises the robust H2. Notably, most of the decline in H2 was because of the absence of the rental cars. The business as well as private market available to dealerships in the time span of 6 months was very similar to the prior year.

As per management, the demand for entire new vehicles remains robust. Total new registrations reached a high of 84,598 vehicles during H1 of this calendar year.

The supply of electric vehicles from its franchisors is small but increasing. Ford has managed to launch the plug in hybrid Escape as well as a plug in hybrid Transit Custom, as well as Mazda a fully electric MX30. The management stated that the sound performance was reported across the areas of the business, car dealerships, heavy trucks, as well as tractors during FY21.

The management believes the prevailing favourable trading environment coupled with the benefit of robust demand for new vehicles, constrained by the supply difficulties, would sustain for the immediate future.