Summerset (NZX:SUM): Is it the best aged care provider in New Zealand?

In November 2021, Summerset was awarded the best retirement or lifestyle villages & aged care facilities provider in NZ in the 2021 Peoples’ Choice Awards. 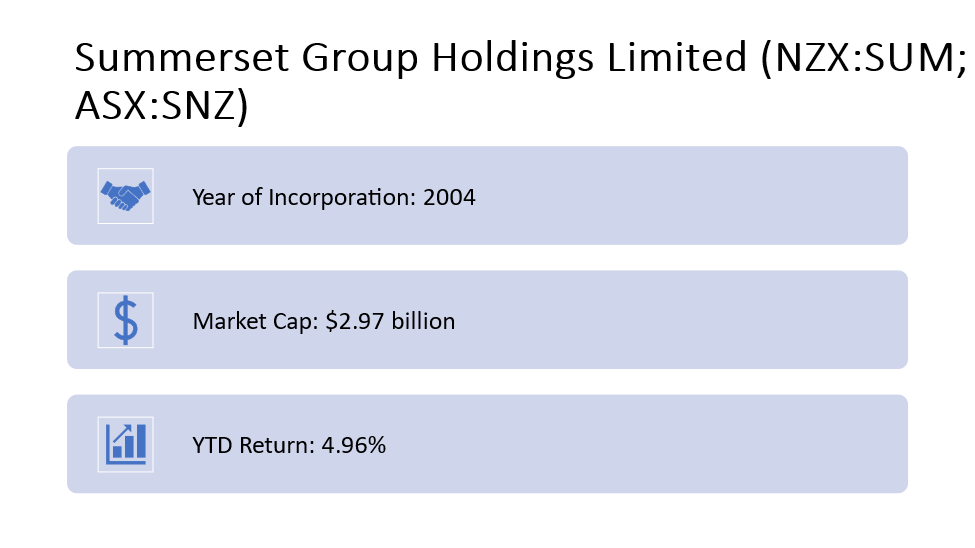 The retirement village operator announced a reported profit of $263.8 million and registered a development margin of 21.6% for the 6 months ended 30 June 2021. The Group’s total assets also rose 27% to $4.4 billion in the period on pcp. Summerset paid an interim dividend of 9.9cps on 20 September 2021.

The Group built a record 347 new units and 26 care beds in the 6-month period.

Summerset made 199 sales that included 117 fresh sales and 82 resales for the third quarter of 2021.

Summerset CEO Scott Scoullar stated that the Group saw a strong result in Q3 despite a nationwide lockdown in August; especially in new sales that were 17% higher than the same quarter last year. He also added that roughly 83% of sales came from outside the Auckland region.

DO READ: 5 NZX healthcare stocks that can be followed ahead of 2022

The Group pre-sold all independent living units that will be delivered over the next 6 months at its new Mt Denby retirement village in Whangarei.

Summerset plans to lift its build rate for 2021 from between 500 and 550 units under the Occupation Rights Agreement to 550-600 plus 52 care beds to fulfil the increasing demand.

The Group also proposes to bring its model of care to older Australians and has been looking to increase its presence in Australia.

It was also the first retirement village operator in NZ to connect sustainability accomplishments with funding plans under a newly signed contract.

The Group is continuously on the lookout for renewable energy resources for its villages like the environmentally friendly wood pellet boiler which will be used to heat SUM’s St Johns village main building when it opens in 2026.