While globally several industries suffered substantial losses due to the onset of the COVID-19 pandemic, the healthcare industry seemed to have done better than others in the times of the COVID-19 pandemic. Whether it was about becoming more health conscious, or it being an essential service and hence functional through the toughest of lockdowns, there could be many reasons. Have a look at some healthcare stocks that you need to watch out for. 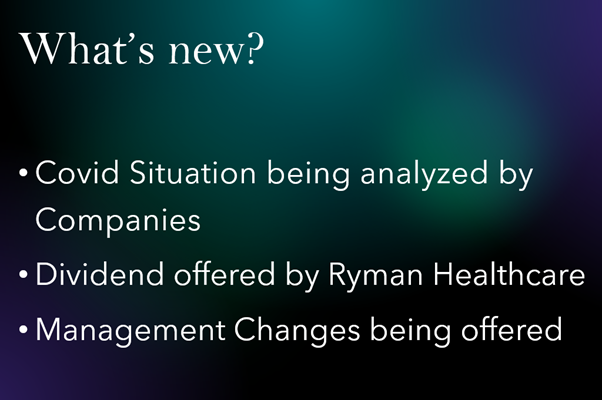 As reported recently, Promisia Healthcare appointed Chris Brown as the new Chief Executive Officer. Previously, he has held roles in senior management with companies of the likes of Contact Energy. Welcoming him into the role, Stephen Underwood, the Chair for Promisia, said his skillset could bring upon a new phase of growth for the company.

In the annual report released by Ryman Healthcare,  it earned NZ$224.4 million, which was 7.3% lower than previous year, while the full-year dividend offered to the shareholders was 22.4 cents per share. The IFRS profit reported by the Company was NZ$423.1 million, which was a 59.8% increase.

Offering medical cannabis-related products, this Company is known to be one of the primary suppliers of the same in the country. Released recently, in its half-year results, the Company offered NZ$4.63 million cash in hand, and an operating loss of NZ$1,992,634. The Company is currently assessing its situation in terms of possible losses due to the COVID-19 pandemic.

Read more: Which are 10 major healthcare companies trading on NZX?

Offering different kinds of prescription drugs, this Company is known to function in NZ and Australia besides a few Southeast Asian countries. In the annual meeting held by the company, it was declared that Anita Baldauf and Ted Witek would be appointed as Directors to the Company. David Flacks is to be re-elected as a director. It was further said that the remuneration of the Deloitte-appointed auditor shall be determined by the Company’s directors.

Read more: Which are the well-known retirement village shares in New Zealand?

This company is known to operate retirement villages and care facilities in over 40 locations across the country. After a second funding which did well oversubscribed, the company is on the road to substantial capital raising. It was recently announced that the bonds should operate at a 3.30% per annum interest rate, which is reflective of a 1.45% margin above the swap rate.

After Going through films due to COVID-19 last year, these stocks seem determined for growth and recovery in the upcoming months.