Growth stocks are those stocks that are likely to grow their sales and earnings at a rate significantly above the average growth for the market. They are issued by firms that demonstrate a high potential for growth in the future. 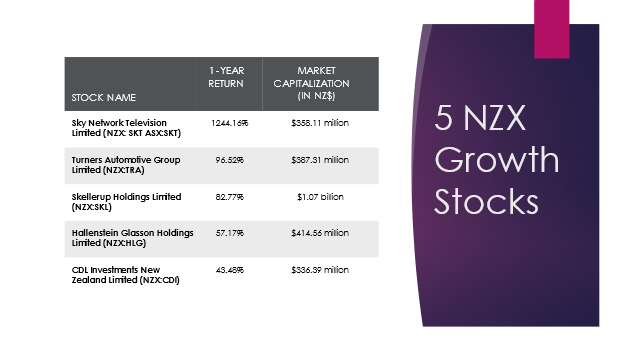 Have a look at the five stocks which are best performing NZX-listed growth stocks.

TV operator, Sky Network, posted a strong FY21 result partly due to operational improvements and partly due to one-off items. It secured a customer base of 955,168 with further stabilisation of worthwhile Sky Box base and a 57% increase in streaming.

Related Read: How are these 3 NZX communication stocks performing amid frequent internet outages?

The Group announced the completion of its share consolidation process of merging every 10 Sky shares held on 16 September into 1 share. The Group is securing more rights for its customers like Discovery, Foxtel, ESPN, etc., which matter to its customers.

Automotive financial solution provider, Turners Automotive, reported that it had enhanced profit impetus and broadened competitive benefits. The Group is also gratified with its advancement towards its FY22 and FY24 targets.

The delta outbreak-induced lockdown in August will have a material impact on the business in the near term.

DO READ: 5 hot NZX technology stocks to explore in September 2021

The Group announced on 9 September that TRA100, an NZX-listed subordinated bond, will be delivered on its maturity date, 30 September 2021.

Skellerup Holdings, a distributor and manufacturer of polymer products and vacuum systems, reported a 11% increase on pcp in revenue to $279.5 million in FY21. NPAT and EBITDA numbers also saw a rise of 38% and 22%, respectively, on pcp.

The Group recently acquired Talbot Technologies for $10 million. The Group will pay a final dividend of 10.5cps on 15 October.

Clothing retail firm, Hallenstein Holdings, had provided a trading update on 18 August. The Group noted in the update that it would continue to monitor the situation to lower any unfavourable impact on trading as NZ moved to the Level 4 Alert.

RELATED ARTICLE: Are the 5 NZX retail stocks benefitting amid the pandemic?

However, HLG declared that its online stores will continue to trade for essential items.

These stocks have high P/E ratios with robust business plans ahead. However, investing in these stocks can be equally risky as the expected growth can halt at any time in the future.