The year 2020 has been a difficult one for the policymakers as well as general public. COVID-19 has been an extraordinary event affecting millions of people across the world, pushing governments to take rigorous actions. These actions include enforcing lockdowns, closing borders and trade in an attempt to restrict the spread of the virus. However, it can be said that markets have largely recovered from the lows. As market players are aware, the performance of asset managers is influenced by the performance of the broader markets. This company declared final dividend of 14 cps fully franked even though it witnessed fall in the income in H2. This stock has delivered a return of ~11.35% in the time span of 3 months. However, in the past 6 months, the stock has increased by ~17.69%.

Australian Foundation Investment Company Limited happens to be a listed investment company, investing in Australian as well as New Zealand equities. The company’s major goals are:

For the year ended 30 June 2020, the company reported full-year profit of $240.4 million as compared to $406.4 million in FY19. Investment income was down, as various one-off items were not repeated this year. Also, many companies reduced or deferred dividends in the H2 of the year, which also meant a decline in the dividend income.

Earnings per share stood at 19.9 cents in FY20, down from 34.0 cents in FY19. The company has reserves which could be utilised in more challenging conditions. Therefore, the final dividend was maintained at 14 cps fully franked even though there was a fall in the income in the second half. 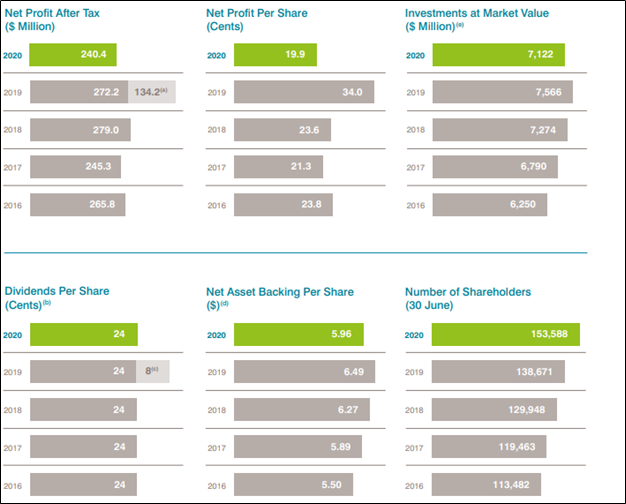 Performance of Market and Portfolio

The Australian share market was ready for a very strong year up until the world was suddenly hit with the COVID-19 pandemic in the early part of calendar year 2020. Notably, from market peak in the month of February through to the low point for the year in late March 2020, S&P/ASX 200 price index witnessed a fall of 36.5%. Surprisingly, despite of the substantial decline in the economic conditions, the S&P/ASX 200 price index was up by 29.7 percent from this low point until the end of the financial year, mainly due to expansion in market valuations. 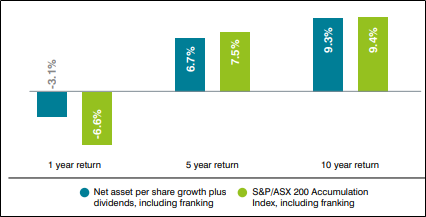 The healthcare sector continued to perform well led by the strong performance of the companies like CSL, ResMed and Fisher & Paykel Healthcare. Information Technology regained its ground strongly, mainly by the uplift in the share price of Afterpay (which AFIC does not hold) as well as the performance of Xero and NEXTDC. 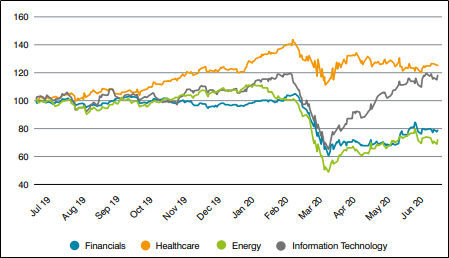 Performance of Selected Sectors of the Market (Source: Company Reports)

The company took advantage of the fall in the share prices to increase the holdings in companies it wanted to own.

Three new companies were added in the portfolio:

The company is uncertain about the next financial year as companies are facing an extremely challenging environment. While latest fiscal and monetary support has offered some breathing space for the economy, the trading environment in the future is going to be largely influenced by the advancement made on controlling COVID-19 in Australia and across the world.

The company believes that its portfolio is well-positioned to withstand further volatility provided the high quality of the companies in it.