Dividend amounts are frequently distributed -quarterly, half-yearly or on an annual basis to the stakeholders of a company.

The dividend share is portion of profits earned by a company, however, not every listed company pays the amount to the stakeholders.

Each dividend amount paid on a regular basis are approved by the Board of directors in a company.

Let’s now skim through the 4 NZX dividend stocks that are payable in Q4 2021. 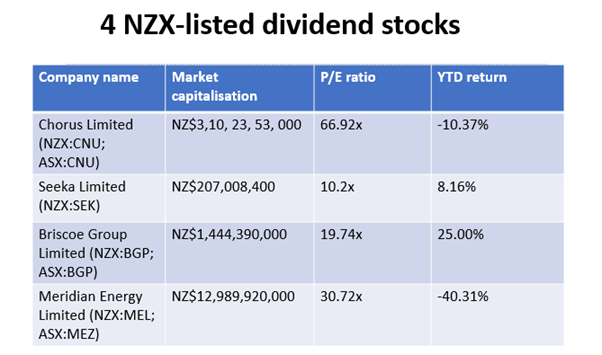 During the period, total revenue stood at NZ$947K, down by 1%. While EBITDA was noted at NZ$649 million, marginally increasing by FY20’s EBITDA standing at NZ$648 million.

Related article; How is Chorus (NZX:CNU) progressing with fibre installation?

For the period, net profit before tax was noted at NZ$30.8 million, surging by 77% on pcp.

Do read; What are the 5 most interesting NZX Stock Stories?  FBU, SEK, BLT, MHJ, ZEL

As a holding company for its retail stores situated across NZ region Briscoe Group Limited had released its results for the 6- month period ended August 2021.

The directors of the Company declared the six months dividend amount of 11.50 cps to be paid on 14 October, which has risen from pcp where it stood at 9.00 cps.

During the period, total revenue stood at NZ$4,296 million, which was 26% up on pcp. Net profit from continuing operations stood at NZ$428 million, rising by 145% on pcp.

The Board announced the final dividend distribution of 11.20 cps, payable by 15 October.

Most of the organisations make an effort to remain consistent with the regular dividend payout track record, which could possibly attract investors towards them.