As per the latest update, both NZ and the UK have agreed to an all-inclusive FTA (Free Trade Agreement), which would immediately eliminate NZ$14.1 million of tariffs on a yearly basis.

The dairy sector would receive commercially important access to milk produces like butter and cheese. Apart from these, several other dairy products would become tariff-free over a period of time.

On the given background, let’s check the main headlines from 3 NZX-listed dairy stocks. 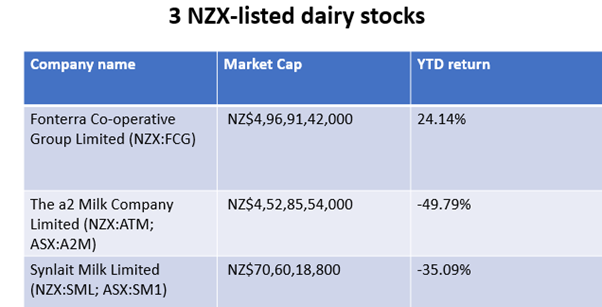 On the FTA front, Fonterra’s CEO Miles Hurrell summed it up as a fantastic result for NZ. He added that the UK was the second-biggest importer of dairy by value, with consumers in the high-value division who are keen to pay for NZ provenance, their sustainability credentials and innovation.

On 21 October, the Company notified the market that it was informed of media reporting related to a prospective class action against it, which is actually being probed by Shine Lawyers.  The Company is not aware of any legal proceedings filed by lawyers.

Also, The a2 Milk thinks that it has always complied with its disclosures agreements, refutes any liability and is planning to defend any proceedings against it.

Do read; Who is the major shareholder of The a2 Milk?

A manufacturer of nutritional milk powders and ingredients, Synlait Milk Limited is functional since 2000.

Earlier this month, Synlait notified the market that it had formally unveiled its first consumer foods product ‘Synlait Swappa Bottle’. It is a 1.5-litre stainless steel bottle with homogenised milk, especially sourced from its best farm.

NZ’s Trade Minister Damien O’Connor stated that it was important that the deal offered a thorough and commercially important access for NZ’s exporters and companies, particularly the dairy and meat producers who are the pillar of the nation’s economy. This agreement would be able to attain it.