The logistics and freight company surpassed $50 mark for the first time in history after declaring its revenue during the first half standing at $1.6 billion at the investor presentation of the Company.

ALSO READ: NZX Stocks Rejoice with the benchmark Index up ~5% in Oct as Jacinda wins the second term

Mainfreight Limited (NZX:MFT) is a listed NZ company that provides air and ocean freight services, logistics and warehousing services in NZ and Australia.

The Company revealed in its market update dated 14 October that its revenue and profit before tax will improve by estimated 7.2% and 23.4% to $1.6 billion and $0.1 billion respectively, for 6 months ended in September.

Amid a variety of complexities associated with the current COVID-19 pandemic, circumstances in Europe and the Americas were a drain on profits.

Let's have a look at financial reports of these 2 regions.

COVID-19 and segment performance in NZ

The Company revealed in its presentation that the loss in traditional international tourism witnessed due to COVID-19 was counterbalanced by enhanced domestic tourism and returning kiwis. Overall volumes are on the rise, and the Company is well-placed to convert outsourcing and supply chain enquiries.

Let's have a look at the performance of Mainfreight across different segments in NZ. 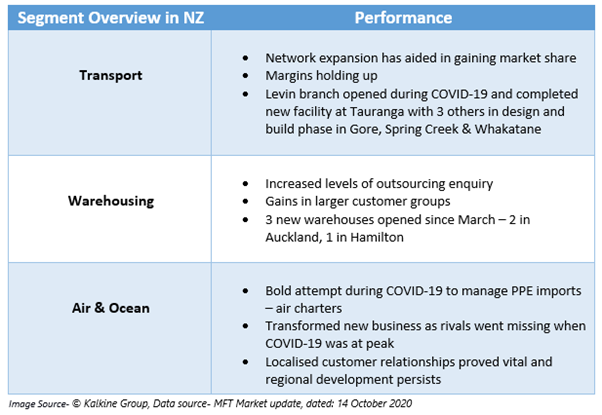 Mainfreight stated that there had been continued trading improvements from reputable consumers and growing market shares throughout all the three divisions. Seasonal growths in trading, pre-Christmas, were anticipated, and Mainfreight continued being carefully optimistic.

Some of the priorities and actions that were taken by the Group included of the following:

Further, the firm has applied review for European wage/salary from 1 October along with the full restoration of Directors' fees and Managing Director salary.

The overall outlook of the Company’s business is positive, with a rise in domestic transport volumes, improving customer sales and demand, increasing pressure across the sea and air freight capabilities.

The overall outlook of the business is positive with a rise in domestic transport volumes, improving consumer sales and demand, rising pressure throughout the sea and air freight capabilities.

ALSO READ: Zoom Your Lens Over Bright Spots Dazzling in the NZ Economy

However, there remains the need for being cautious on pre-Christmas volumes, with the effects of secondary COVID-19 infection rates impacting economies further.

The Group stated that it was reacting to the uncertainties by taking a conservative approach on capital spending, although it was seeking land opportunities in Nelson and Auckland. In the next financial year, MFT expects to increase capital expenditure.

The organisation will announce its performance for the first half on 11 November.