As recently announced, dairy prices witnessed a rise in the global auction, indicating that the demand for one of the largest export commodities of the country was steady and moving upwards.

There was a 1% increase witnessed in the trade price index (global dairy), in the auction that occurs every 15 days.

Before this, there was a 4% rise witnessed in the same, in the last auction, which was the highest it had been since March when there was a 15% rise seen. 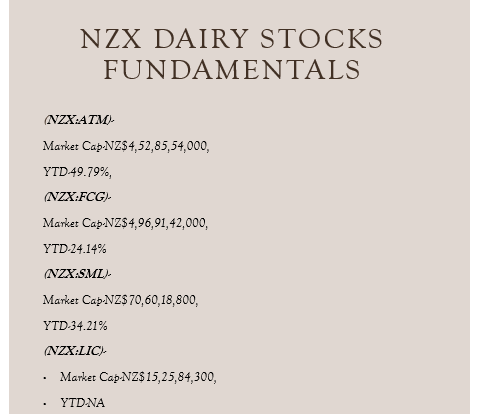 Let’s have a look at some NZX- and ASX-listed dairy stocks.

This company is listed in New Zealand as well as Australia and is known for its extensive trading through different countries.

Though the Company witnessed losses in its annual results declared last month, with revenue down by 30.3% standing at NZ$1.21 billion, it was chalked up to the effects of the pandemic. There are since signs of recovery being noticed.

Of late, the stock announced its annual meeting to be held virtually on 17 November 2021.

Also read: How are the 6 stock prices moving on NZX?

Fonterra is an NZX-listed dairy Company, which works in a co-operative format. This Company released its annual results Thursday showing a profit after tax of NZ$599 million, and a final dividend of 15cps. The normalised EBIT was recorded to be NZ$952 million, an increase of NZ$73 million, while the long-term strategy of the Company remains progressive in terms of sustainable growth goals.

This Company offers services through different locations such as Canterbury, Temuka, Christchurch, Dusandel and so on.

Recently, the Company has announced the leaseback and sale office premises at the Richard Pearce drive Mangere in Auckland. Besides this, the annual meeting has been confirmed to be held on 1 December 2021.

This herd development and Agri-tech-based business is known to flourish through different New Zealand locations. The annual meeting has been announced to be held virtually on 14 October 2021 due to the current uncertainties surrounding COVID-19.

Growing strength to strength and tackling the effects of the pandemic, dairy stocks of the country have so far shown resilience.