Recently, the Free Trade Agreement signed between New Zealand and the United Kingdom would greatly benefit wine manufacturers as well as wine connoisseurs across both the countries.

UK authorities have announced removing tariffs and reducing trade barriers on a wide range of NZ goods, though exact details have not been disclosed.

It is pointed out that NZ wines are the sixth-largest wine category by value in the British nation, and its wine drinkers love premium NZ wines like Sauvignon Blanc wine, etc., which could now be cheaper to purchase owing to the Free Trade Agreement.

With this backdrop, let us cast a glance at the top NZX wine stocks which are slated to draw benefits from the recent FTA between the two countries. 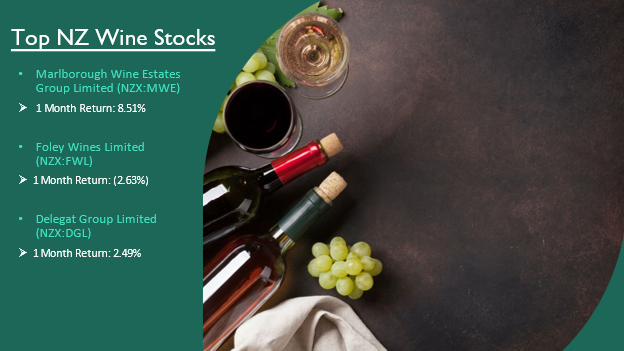 The famous wine company has announced to organise a virtual 2021 Annual Meeting of Shareholders on 10 December.

How would NZX wine stocks benefit from Free Trade Agreement

Also, the Company has urged its shareholders to send nominations for the post of directors by 9 November.

One of the most acclaimed wine brands from New Zealand is Foley Wines Limited. The Company has notified its investors of conducting its ASM.

Due to a continuous rise in Delta cases, FWL would hold the said meeting online on 17 November.

Also, it intends to pass resolutions regarding the re-election of directors and empower its Board to determine auditors’ fees.

Do Read: 10 best food and beverage stocks of New Zealand

Headquartered in Auckland, Delegat Group Limited is another premium wine company in New Zealand. DGL has scheduled its Annual Meeting for 7 December in Auckland.

Other details regarding the same would be intimated later.

Also Read: Look at the 5 hot consumer stocks on NZX

The country’s wine industry constitutes one of the major exports producing sectors of New Zealand. With this FTA, NZ anticipates a further rise in its wine exports.