Sky Network Television Limited (NZX:SKT;ASX:SKT) announced on Friday that the consolidation of every 10 Sky shares held on 16 September into 1 share has been finalised. The total issued capital of shares after the consolidation stood at 174,688,323 shares. This was marginally greater than 174,687,956 projected before the start of the procedure. This was because of the rounding done of fractional right to shares.

Computershare, the share registrar of Sky, will be sending notices to the shareholders on 20 September concerning their new shareholdings. Sky’s shares will resume trading on NZX on a post consolidation basis from Friday. 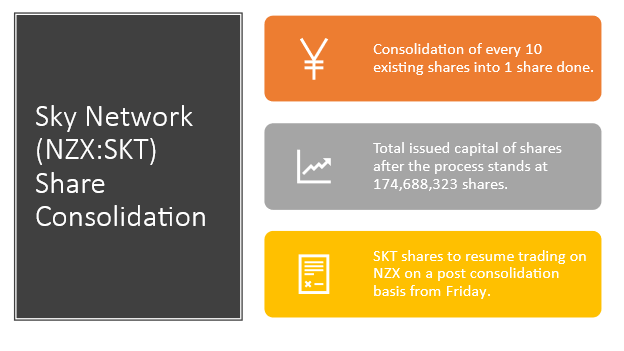 RELATED ARTICLE: What are Sky Network’s (NZX:SKT) FY22 guidance and targets to achieve?

It is done by a company to reduce the number of shares that are trading on the exchange. However, the consolidation process does not lead to any change in the voting rights and dividends to shareholders.

In an August update, Sky had revealed that the Ex-date for the consolidation was 15 September and the record date for the same was 16 September.

Share consolidation is done to clean up the share capital of the company or decrease the shares obtained for a payment of specific amount.

The share consolidation process is majorly done by public corporations when their shares’ prices have dropped, and they want to increase their underlying share price to make them more attractive to investors or prevent the delisting of shares.

RELATED READ: How are these 3 NZX communication stocks performing amid frequent internet outages?

After share consolidation, an investor holds lesser shares, but each share is proportionate of more worth. Subsequently, the process does not result in any alteration in the value of what an investor owns or the total market capitalisation of that organisation.

Share consolidation helps the company in altering the share capital structure and increasing the par value of its shares.