New Zealand boasts a well-established and strong financial system comprising some of the world-famous banking and financial institutions operating on its shores.

As per Stats NZ, the June 2021 quarter witnessed a growth of NZ$27.8 billion in the total financial assets of the country’s financial business sector, which was primarily driven by increased lending to households for residential mortgages, clubbed with relatively smaller growth in lending to non-financial businesses.

Further, debt security assets, like bonds also rose in the said quarter on account of the Central Bank’s continued rise in its holdings of the NZ Government's debt securities.

Moreover, a growth of 2% was seen in liabilities of the country’s financial business sector towards June-end 2021 when compared to March-end 2021.

That said, let us look at the five NZ banks which are likely to benefit from this growth. 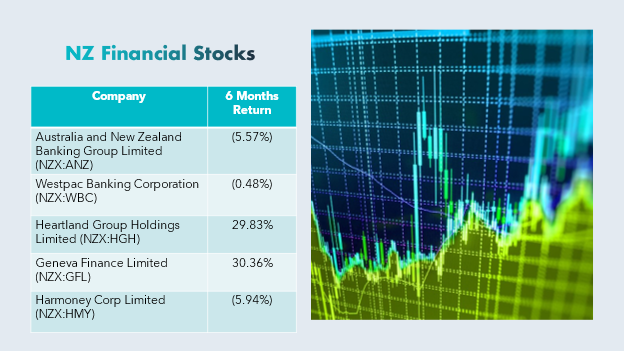 The Company has declared that its statutory and cash profit after tax pertaining to the second half of 2021 might be affected by remediation and restructuring charges, amounting to AU$113 million and AU$16 million, respectively.

It is noted that ANZ will reveal its full-year results for 2021 on 28 October.

One of the leading banks of New Zealand is Westpac Banking Corporation. Recently, the Company had revealed that its 2H21 net profit and cash earnings would be lowered by AU$1.3 billion owing to certain notable items.

Must Read: How are 5 NZX financial stocks faring amid economic recovery?

They include the write-down of assets like goodwill and capitalised software, additional provisions for litigations and customer refunds, and many more.

WBC has scheduled to release its annual results at the beginning of November.

It must be noted that the said meeting will be on 28 October.

Related Read: Why these 4 NZX value stocks are worth following in October

Founded in 2002, Geneva Finance Limited offers finance and financial services to consumers and various small and medium businesses. In its Annual Shareholder Meeting held last month, the Company passed a resolution for the re-election of Alan Leighton Maiai Hutchison as its director.

Further, the Board was authorised to fix the auditor’s remuneration for FY22.

Topping off the list is Harmoney Corp Limited, which was established in 2013 and is based in Auckland. The Company has revealed to hold an online Annual Meeting on 29 November.

If deemed fit by its shareholders, HMY plans to carry out resolutions pertaining to the election of Paul Lahiff as its director and empower the Board to determine the auditor’s expenses.