Generally, broader markets in New Zealand get affected by global economic concerns as well as health of the global economy. Also, broader performance of the New Zealand economy influences performance of NZ equities. Notably, if the NZ economy performs better, the investors might decide to allocate their investable capital towards equities which could help in favourable momentum of broader stock markets. Let us have a look at the performance of S&P/NZX50.

We would now be covering some stocks which investors should look at.

A Recent Update on CAV

Cavalier Corporation Limited has recently released new transformational strategy. As per the release, this strategy places it with an all-wool and natural fibres business model. The four strategic pathways through which the company’s growth will be driven are:

QEX Logistics Limited a cross-border logistics company serving NZ, Australia and China. The company enables storage, supply, packaging, customs clearance as well as delivery of NZ products bought from stores, online and e-commerce sites by the individual consumers from China, or through a daigou.

The company has recently released unaudited financial results for the year to March 31, 2020 (or FY 2020). It reported revenue of $62.8 million, an increase of 5.7 per cent (or $3.37 million) on PCP, despite of various challenges faced during the year, including a 4th quarter in which, initially China, and then New Zealand went into lockdown to tackle the rapid spread of Covid-19.

The net profit after tax declined to $1.2 million. This includes the impact from a key supplier re-branding a product and costs related to the establishment of the new Australian operations. For QEX, FY20 was divided into two parts. The first half was challenging, and in the second half, the company experienced the highest revenue month in history in November.

The company has decided not to declare a dividend at this time as the company has recently raised additional capital to fund growth. 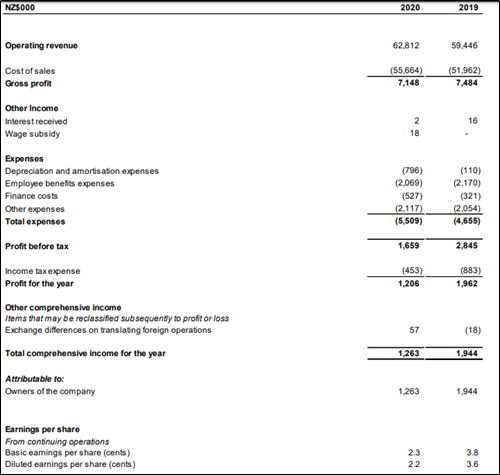 For the half year ended 31 March 2020, the company reported total revenue of $50.6 million, down by 7% on 1HFY19. This is because of the loss of numerous UK customers as a result of supplier failure or acquisition, and a decline in non-recurring revenue in Australia as well as the United Kingdom.

For the year ended 31st May 2020, Oceania Healthcare Limited has reported Underlying EBITDA of $63.5 million, even though the company was not able to sell retirement village units throughout the final quarter of the financial year because of the lockdown imposed by Government. The company’s operating revenue rose by $7.0 Mn (or 3.7 percent) as a result of increased aged care occupancy. However, higher income from premium rooms as well as increased income from retirement village operations also contributed to the increase.

Good Spirits Hospitality Ltd is a listed investment company that focusses on the hospitality sector.

In the release dated June 29, 2020, the company stated that it has lately tendered its financial audit which has resulted in the decision to hire BDO New Zealand as its auditor and the resignation of PwC. As per the release, this appointment would be put to the company’s next AGM for ratification.

PaySauce Limited is a SaaS employment solutions provider which allows business owners to pay and manage employees accurately and efficiently with the help of iOS, web, and Android applications.

PaySauce Limited ended the first quarter of FY21 with continued robust growth. The company’s total recurring revenue increased by 54 per cent to $449K as compared to 1QFY20.

PYS welcomed over 330 new clients in Q1. This implies a 13 percent increase in the total customer base since March 31st despite coronavirus pandemic as well as nationwide lockdown.