Weekend wrap: The 5 most active stocks on NZX

The most active stocks of the day are those that trade the most during the day. Due to corporate performance, any major new update or news that influences a stock’s price, these equities get larger than typical trading volume.

This makes it easier for investors to decide whether or not to get a specific company’s stock, resulting in increased trading volume and a strong impetus.

Let’s look at the 5 most active stocks for Friday. 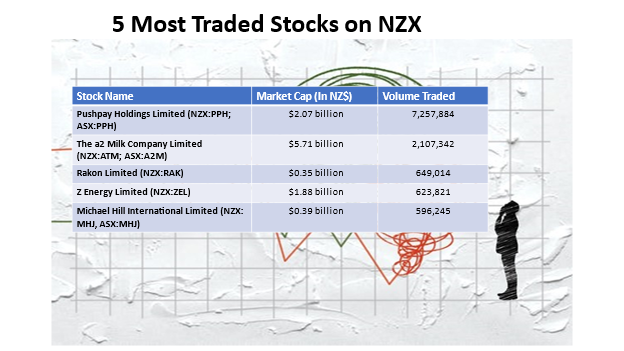 Pushpay continued to deliver revenue growth, net profit and EBITDAFI growth for the 6 months ended 30 September 2021 as its products’ sales and customers increased.

ATM has pursued a growth-driving strategy across multiple horizons after it witnessed a difficult FY21. The Group expects to deliver next-wave growth from innovation and supply chain transformation by FY25-26.

DO READ: 3 NZX growth stocks nobody is talking about in 2021

On Friday, the Group upgraded its earnings guidance for FY22 and expects to reach an EBITDA of $44 million to $49 million in FY2022.

ZEL recently appointed Julian Hughes as General Manager, Supply, while confirming that David Binnie would be working with the firm till 31 December 2021.

The Group released its AGM presentation on 27 October. MHJ stepped in FY22 in a healthy financial position, permitting it to continue its renovation, promote its brand, and delve into new growth possibilities across all routes and geographies.

Investors keep an eye on the most traded stocks to take better investment decisions.