Today, Kiwiland is bustling with important and significant news from almost all sectors of the economy. 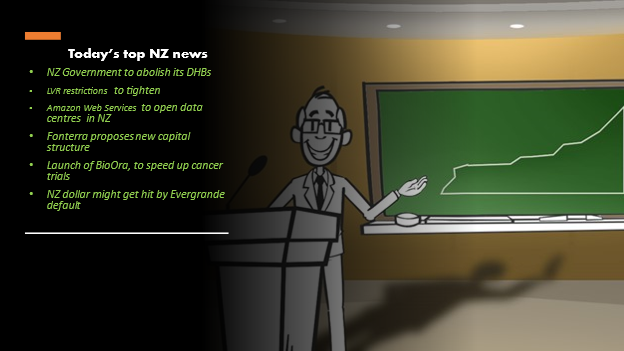 Talking about the COVID-19 situation across New Zealand, 15 new cases related to the Delta community outbreak have emerged in the Auckland region, thus taking the total number to 1,123 in this winter outbreak.

Related Read: How is New Zealand gearing up for vaccine passports by December this year?

NZ Government to come up with a centralised healthcare system

In this regard, it disclosed the interim boards of Maori Health Authority and Health New Zealand. Also, legislation on the said changes would be launched next month.

Talking about the economic front, The Reserve Bank of New Zealand has disclosed that it would go ahead with the stiffening of LVR, i.e., Loan-to-Value Ratio restrictions from 1 November onwards.

The move has been taken to prevent the worsening of the problems related to ever-growing and unsustainable house prices, which is posing a serious risk to the country's economic and financial stability.

AWS announces to open data centres in the country

As per the latest update, an Amazon.com, Inc. (NASDAQ: AMZN) company, AWS, i.e., Amazon Web Services, has revealed its plans to open an infrastructure region in Auckland in 2024, wherein customers would be allowed to securely store data in the country.

It must be noted that this region would enable an increased number of startups, enterprises, government as well as various non-profit organisations to serve their end users from these NZ-based data centres.

This new AWS region through an investment of NZ$7.5 billion would help in creating 1,000 new jobs across the country in the next 15 years.

Fonterra Co-operative Group Limited (NZX:FCG), the country’s dairy giant,  has released its annual report and proposed a new capital structure so as to expand its domestic market share.

According to the proposal, this new capital structure would easily enable new farmers to join the co-operative. Also, its minimum shareholding requirement would be fixed at 33% of the milk supply.

Hence, with the overhauling of its capital structure, Fonterra expects to achieve a surge of 40%-50% in its operating profit by 2030 and plans to return NZ$1 billion by way of dividends and sales by FY24.

Coming up next is NZ’s climate and environment front, wherein the NZ Government, with an aim to protect health of its people and environment, today announced the funding, through the Contaminated Sites Remediation Fund, to support to clean-up of contaminated and hazardous sites based in Dunedin, Northland, and Southland.

Do Read: Is New Zealand on the right path to become a zero-carbon country?

Lastly, as the news of bankruptcy hovers over Evergrande, China’s giant property developer, the NZ dollar posed a defensive outlook.

Today, the Chinese property company is due to pay interest on one of its dollar bonds and a potential non-payment may result in global unrest.