The stock price of New Zealand Oil & Gas Limited (NZX: NZO) ended the session in green as it witnessed a rise of 9.80% on an intraday basis to NZ$0.560 per share. The share of Scott Technology Limited (NZX: SCT) encountered a decline of 6.02% to NZ$1.560 per share.

The below chart provides a broad overview as to how the stock price of SCT has trended in the span of past 90 days: 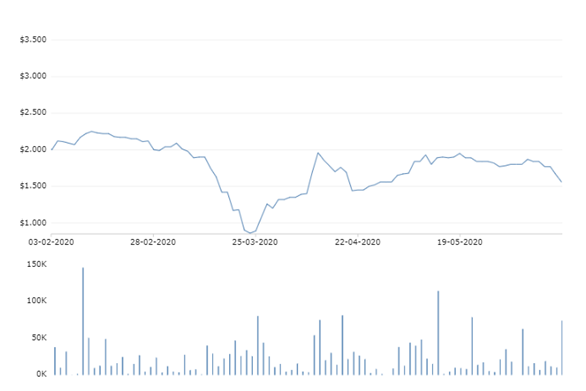 Augusta Capital Limited (NZX: AUG) came forward and made an announcement that the company has received a takeover notice for the full takeover of AUG from Centuria Capital Group to acquire shares that would be taking its holding to 100% of shares at a price of $1 per share.

AUG has also notified that its Board has formed a committee to oversee AUG’s response to Centuria’s takeover notice as well as any ensuing takeover offer. As per the release issued, committee members are Independent Chairman, Paul Duffy, and Independent Directors Mark Petersen and Kevin Murphy.

The committee has also appointed Cameron Partners as financial adviser to the committee. However, Chapman Tripp has been appointed as legal adviser. Independent Directors recommend that shareholders do not take any action with regards to their shares until they get a target company statement, including any recommendation from the Directors of Augusta, as well as independent adviser’s report.

Announcement of Opening of Share Purchase Plan By AFT

AFT Pharmaceuticals Limited (NZX: AFT) has made an announcement about the opening of NZ$2 Mn non-underwritten share purchase plan (or SPP). SPP happens to be a part of the company’s capital raising which was announced on June 10, 2020, whereby it also undertook a fully underwritten NZ$10 Mn placement of new shares to select investors in offshore and local markets as well as certain major shareholders sold down NZ$63.8 Mn of the existing shares.

The website has been prepared for informational purposes only and is not intended to be used as a complete source of information on any particular company. The above article is NOT a solicitation or recommendation to buy, sell or hold the stock of the company (or companies) under discussion. Kalkine does not in any way endorse or recommend individuals, products or services that may be discussed on this site.
Tags:
S&P/NZX50 market update