TradeWindow is planning to get listed on the NZX on 22 November subject to final regulatory agreements.

TradeWindow was founded in December 2018. It is a technology start-up company that helps importers, exporters and brokers working at the forefront of the trade globally. The Company offers a digital trade platform that covers compliance, data sharing, operations management, etc. 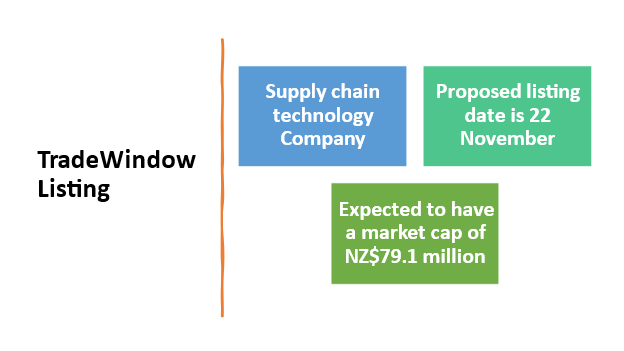 The Company is likely to possess a market capitalisation of $79.1 million on getting listed. The investment round was led by ASB Bank, which offers trade finance to several Kiwi exporters. Other investors included were Quayside Holdings - the majority shareholder in the Port of Tauranga and Anna Mowbray who is the co-owner of ZURU Group.

TradeWindow will join the NZX as a direct listing and not an IPO. Direct listing is a process where a company goes public by putting its existing shares on sale instead of offering new ones.

Alasdair MacLeod, the company's independent chairman, believes the direct listing would further solidify the company's standing as a trusted partner for big commercial organisations and government bodies as it strives to grow swiftly.

Mr MacLeod stated that as a software solution supplier for individuals working on front lines of global commerce, trust and transparency are critical. The rules and disclosures expected from the Company as a listed business will support TradeWindow's position as a trusted intermediator for its clients and partners, he added.

RELATED READ: Radiopharm IPO: What is in it for NZ investors?

Has TradeWindow raised any money before?

TradeWindow had raised an oversubscribed capital of $15 million through a Series A round in September this year. The round was over-subscribed by $3 million and by adding seed capital, the Company has raised $22 million.

The Company is not looking to raise any more capital after this round.

TradeWindow is targeting a wider market, providing a route for investors to get involved in the wider Australasian export story as trade is crucial for the ongoing economic recovery.

The Company’s trade tech solutions can lower trade costs by 14.3% while advancing global trade by up to US$1 trillion a year.