In this article, we are going to have a look at the top and worst performers of the week ended May 22, 2020.

Argosy Property Limited happens to be one of the country’s leading listed property companies. For the 12 months ended 31 March 2020, the company’s net property income stood at $99.7 million, down by 2.7% from the previous year.

The independent work conducted by valuers led to an annual revaluation uplift amounting to $60 Mn.

For the six months ended 30 September 2019, the company’s net profit after tax increased by 47% to $45.0 million, as compared to previous corresponding period. Underlying profit for the period was reported at $23.4 million, an increase of 31% on pcp. The strong growth in underlying profit was led by solid margins and higher volumes on the resale of occupation rights.

The company had 2,359 retirement units and 1,682 aged care beds spread across 32 villages at the end of the period. 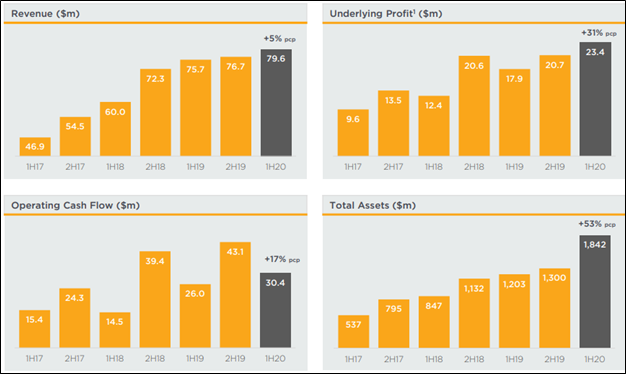 In the release dated 28th April 2020, the company advised that none of its aged care centres or retirement villages have reported any cases of COVID-19 to date. Throughout lockdown period, OCA continued to sign applications as well as completed the sales of Care Suites. The company will also gain from the lately declared increase in the Government’s funding for aged residential care.

For the year ended 31 March 2020, the company reported total revenue of US$129.8 million, up by 32% and operating revenue stood at US$127.5 million, up by 33%. The company provided the following guidance, all of which were either achieved or exceeded:

In the coming future, the company anticipates further strong revenue growth as it continues to execute on the strategy to gain the market share. The company is expecting to achieve EBITDAF of between US$48.0 million and US$52.0 million for the full year ending 31st March 2021.

Meridian Energy Limited has released monthly operating report for the month of April 2020 and the key highlights are:

The New Zealand Refining Company Limited has decided to defer all non-essential activity because of the current trading environment and has also reduced the capex estimates from $70 Mn to $40 Mn for 2020.

Sky Network Television Limited has decided to conduct an equity raising of approximately NZ$157 million to ensure that it is well funded to survive the impact of COVID-19 pandemic. The offer price of the equity raise would be NZ$0.12 per share, comprising of:

The company has provided weekly volume data. According to the release dated May 22, 2020, the data consists retail volumes for the company’s network including Foodstuffs, the Caltex network and for the domestic supply arrangements that Z Energy Limited supports. Following is the key data:

The company’s revenue dropped (on average) by around 32% during the month of April but showed a steady improvement through that period of time, both in volume and in the type of activity being performed.