New Zealand unemployment inches towards double digits; ~275k Kiwis could be without a job

The New Zealand economy has a solid foundation. The government has low net debt and a robust net worth. The external liability position of the government has also enhanced recently. Macroeconomic and fiscal institutions are healthy and help in enabling speedy adjustment to economic shocks.

However, the necessary public health measures needed to fight the coronavirus are weighing down on the economy, aggravated by the containment actions being taken abroad and the changed conduct of households, firms and investors due to significant uncertainties. The demand and supply have been affected through the channels of trade, financial markets, labour and confidence. The country is under Alert level 4 with industries like tourism, hospitality and retail having 0 output.

The social distancing measures, lockdowns and resulting shutdown of businesses due to coronavirus pandemic have constrained the economic activity of New Zealand.

Early signs of success with a slower rise in several coronavirus cases daily without draining the health systems capacity are evident in the New Zealand economy. However, this does not imply that the country is successful in eliminating the virus.

According to the Ministry of Health, as on 15 April 2020 (at 09:00 AM NZST), New Zealand had 1,078 confirmed cases with nine reported deaths. The very first case of coronavirus in the country was on 28 February. With a population of 5 million, the country is a small island with few flights has contributed as a distinct advantage in its ability to see a smaller number of cases.

New Zealand acted quite early in taking action to prevent coronavirus from spreading in the country.

Unemployment predictions by the government

The government has paid out $8.9 billion till 09 April to New Zealand businesses under its wage subsidy scheme. The scheme supported 1.47 million people out of which ~1.2 million are employees, and around 1,80,000 are self-employed people.

Unemployment in New Zealand peaked at 11.2% during the early 1990s while the rate was at 6.7% during the global financial crisis.

As per Grant Robertson, Finance Minister of Australia, “If New Zealand stays at Level 4 alert for a strategic four weeks period along with extra government support to businesses, the unemployment rate can return to a level of 5% by 2021”.

He stated that the extra support amounts to an additional $20 billion - $40 billion, which will take the government’s spending on coronavirus to $45 billion - $65 billion in total.

The government has planned even more than $25 billion spent on coronavirus with the Budget being an essential part of the response.

Treasury Secretary Caralee McLiesh said that the annual GDP growth could decrease by a meagre 0.5% or a massive 23.5% in FY20 ending 30 June 2021 contingent on the strategies adopted in New Zealand and the fate of the global economy. Ms McLiesh stated that the country could return to pre-pandemic economic levels by 2024 with substantial loss of income during the course.

Business casualty and job loss in the economy

The country’s media sector is set to lose jobs as NZME, a media house that runs newspaper and radio stations announced a reduction in its workforce by 15%. While the German media company, Bauer that owns New Zealand’s largest magazine titles announced the closure of its operations in the country during early April resulting in about 237 job losses.

The Country’s Burger King outlets have been placed under bankruptcy proceedings. The company has been received by KordaMentha that hopes to sell Burger King’s outlets to a new franchise owner and get it reopened after the lockdown.

The government is expected to announce measures to stop media losses.

Modelling estimates by the Treasury

The lockdown in the country started on 25 March with restrictions on people to leave their houses only to buy groceries or medical need or to go for a walk unless they are an essential worker. The figures came after the government’s dilemma on whether to remove most restrictive lockdown measures from the country during the next week.

The Treasury has released its assumptions on the impact each alert will have on the economic output. 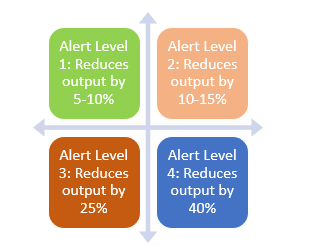 The government has listed critical assumptions concerning the duration of the alert level made for all scenarios. Alert Level assumptions have been selected to cover a range of probabilities for the progression of measures for containment.

The situations start with a deep contraction in the economic activity in the quarter ending June 2020. However, the magnitude of contraction remains uncertain and depends on the success of containment measures and how rapidly there is a reduction in Alert levels.

The scenarios include $20 billion worth of support measures by the government that have been declared to date. The measures comprise of wage subsidies as well as business support initiatives. Two additional scenarios of increasing government support by $20 billion and $40 billion are included that will alleviate the plunge in economic activity and employment to an extent.

The assumptions show how the operations of distinct industries are affected by lockdowns and social distancing for each Alert level.

New Zealand is set to witness a deep economic contraction in the June quarter. The recovery will be contingent on how the governments of trading partners limit the spread of the infectious disease and gather confidence in their economic position.