Capital raising at the time of uncertainty is impacted by future financial constraints of the business, macroeconomic conditions that affect the source and amount of capital, and the existing equity holders of the company. Every business requires cash for carrying out their operations in a standard yet progressive fashion. Any company generates cash through commercialization of its products or services, thereby generating revenue and earning profits.

Cash is something for which a company can continuously expand its capacity to hold, for serving everyday practice along with the unpredicted incidents. Capital raising is a prominent approach for businesses to raise capital to counteract the liquidity crisis. At present, companies are experiencing increased burden to maintain liquidity and sound financial position as they are at a standstill due to the ongoing pandemic that has swiftly spread worldwide.

During the unfolding of the coronavirus pandemic the businesses are progressively tapping investors for capital. At the same time, some of the companies are undergoing growth momentum at the backdrop of COVID-19 turmoil. However, economic activity has been deteriorating since Governments have introduced lockdowns to contain the virus worldwide. Currently, businesses are experiencing an unprecedented impact on their revenue due to the disruption in the supply chain and distribution cycle.

The Group has more than 700 employees across ten offices in New Zealand, South Africa, Australia, the United Kingdom, China, Netherlands, Latin America, and the United States.

Dated 17 April 2020, Vista Group informed the market that the securities of VGL are placed in a trading halt, and trading in VGL ordinary shares would resume at market open.

Auckland Airport had announced that the Company is overseeing an equity raising of up to NZ$1.2 billion to strengthen its balance sheet. Moreover, the Company ensured it remains well capitalised during this time of strict border controls and substantial decrease in the number of travelers. With this, the Company also highlighted that it is well-positioned for a post-COVID-19 recovery, and that the Government actions are supportive of a broad recovery.

By way of equity raising, the Company is also taking significant action in relation to the capital structure for enhancing the financial flexibility. Moreover, AIA has secured considerable backing from its lenders, as well as covenant waivers from the banking group along with the expansions to all bank services owing to mature before 31 December 2021.

Auckland Airport International mentioned that the safety and wellbeing of its people, travelers, customers and stakeholders would be the priority, although mitigating the impact of the coronavirus infection on its operations, with the intention of confirming that it remains well positioned for recovery once this pandemic end.

On 09 April 2020, Auckland Airport announced the opening of its NZ$200 million non-underwritten SPP. The SPP was a component of AIA’s equity raising announced earlier whereby the Company also undertook a NZ$1,000 million share placement to current institutional investors and some select investors in both local as well as offshore markets.

The placement, as well as entitlement offer, will a raise a total of roughly NZ$207 million, with the issue of nearly 414 million new Kathmandu ordinary shares indicating near about 140 per cent of existing shares on issue.

The Placement and Entitlement Offer will be performed at a per-share offer price of NZ$0.50, representing:

The Group revealed that the New Shares issued under the Placement and Entitlement Offer would rank similarly with the existing Kathmandu Holdings ordinary shares.

For the half-year ended 31 January 2020, KMD reported a decent Outdoor segment (Kathmandu and Oboz) total sales up 0.4 per cent at constant exchange rates. 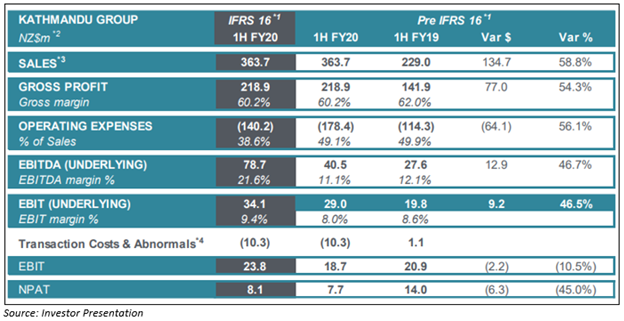 The successful completion of the acquisition of Rip Curl, has created a more diversified group of three famous brands across major global markets.