Let us now skim through four electricity generation companies listed on NZX, covering their recent updates and performance amidst the coronavirus pandemic.

Contact Energy Limited (NZX: CEN) is an integrated and diversified energy company, which is focused on the generation and sale of electricity and gas in New Zealand. CEN has a S&P’s long-term credit rating of BBB/stable and short-term rating of A-2.

The Company recently notified the market about its operational performance for the month of March 2020.

Contact Energy Limited has been classified as an essential business by the Government of New Zealand under the new COVID-19 rules. As New Zealand is at Level 4 of COVID-19, the Company would continue to deliver its services, ensuring support to the Government in a way limiting or eliminating the risk of spreading the virus.

MCY recently halted its construction work throughout its sites as per the NZ government’s directive to stop all non-essential activity due to COVID-19. This suspension includes halting the activity at Mercury’s Turitea wind farm in Manawatu for a period. The Company is well prepared to assist the country’s response to COVID-19 pandemic, with a focus on its employees, customers as well as on business continuity.

During 1H FY20, the Company reported electricity generation of 3,428GWh, reflecting a decline of 377GWh because of drier conditions in Waikato and vital planned maintenance on numerous geothermal stations as part of its long-term asset management plan. Free cash flow for the period stood at $127 million, reflecting a marginal rise from $126 million in 1H FY19 as a result of lower interest costs, tax paid and elevated working capital requirements during pcp.

On the outlook front, Mercury revised its EBITDAF guidance for FY20 to $500 million, down from $510 million, which indicates an anticipated decline of 170 GWh in full-year generation to 3,900 GWh because of dry weather conditions in the Taupo catchment in 2H FY20 (as on 25 February 2020).

Recently, the Company had notified the market that the issue price for shares issued in place of cash for the Interim Dividend in 2020 under the Company’s Dividend Reinvestment Plan was NZ$2.3118/share.

Strong Performance by the Retail Segment in 1H FY20:

The Company recently updated the market with the operational and financial performance for 1H FY20 and outlined the following:

For FY20, Genesis anticipates an improved performance with full Kupe Production and improved trading opportunities resulting from planned outages elsewhere in the sector.

Meridian Energy Limited is engaged in the generation and distribution of electricity in New Zealand and Australia. The Company generates electricity from renewable sources such as wind, sun and water. MEL is also involved in energy software and dam management.

As per MEL, there was a decline of 2% in national electricity demand in March 2020, which is lower as compared to March 2019. Moreover, there was a decrease in weekly demand in April 2020 by around 16% against April 2019 due to COVID-19 lockdown. 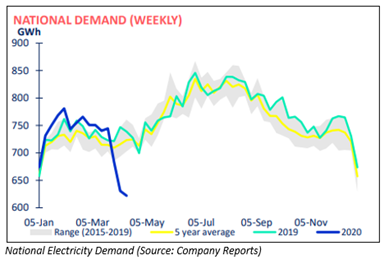