Crude oil prices slipped on Tuesday in the second day of thin trading in Asia amid rising COVID-19 cases in China and prospects for a supply hit from a possible European oil embargo on Russia. Though both the crude oil contracts rose more than 40 cents on Monday and extended their gains modestly during the early trading session on Tuesday.

Earlier, crude oil prices tumbled after China revealed its factory activity data on Saturday stating that the country’s economy contracted for a second month to its lowest since February 2020 because of COVID-19 lockdowns.

The prices of both crude oil benchmarks rose more than 3% in the last week when China’s central bank said that it will pump the country's monetary policy to support the economy which would eventually boost oil demand. 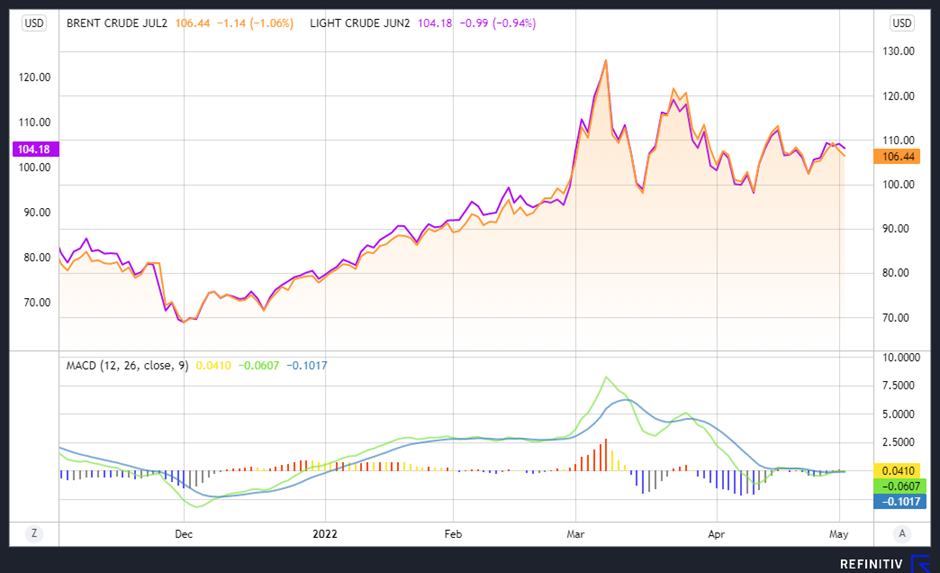 Beijing reported dozens of new coronavirus cases daily in an outbreak that has entered its second week. The region is mass-testing residents to prevent a lockdown similar to Shanghai's over the past month.

Restaurants and other venues were closed in the city and streets were silent on Tuesday during a five-day Labour Day holiday.

Moreover, European Commission is expected to finalise the work related to the sixth package of European Union (EU) sanctions against Russia over its actions in Ukraine. This will also include a ban on importing Russian oil.

However, the embargo may provide relaxation to Hungary and Slovakia which are highly dependent on Russian oil.

Crude oil prices have been on a wild rally but rising coronavirus cases in China have stalled the bull run amid dampen demand.

Crude oil prices tumbled on Tuesday after gaining more than 40 cents on Monday. The European Commission’s sixth set of sanctions to ban Russian fossil fuels has partially offset the losses.