Some Canadian oil and gas stocks like Athabasca (TSX: ATH), Headwater (TSX: HWX) etc., surged as oil prices rallied after the International Energy Agency (IEA) boosted its oil demand growth projections to 3,80,000 barrels per day for this year. According to its latest oil market report released on August 11, the global oil demand is expected to expand by 2.1 million barrels per day to reach 99.7 million barrels a day in 2022.

Brent prices were up by 0.20 at US$ 99.80, while Crude was hovering around US$ 94.22 at 5:16 AM EST on August 11. Keeping these new estimates in mind, Canadians can explore the following TSX oil stocks selected by Kalkine Media®.

Pason Systems is a small-cap oilfield service firm offering fully integrated drilling solutions. Pason revealed that its revenue from North America increased 71 per cent year-over-year (YoY) to C$ 59.63 million in the second quarter of FY2022. International revenue also grew by 58 per cent to C$ 12.31 million in the latest quarter compared to C$ 7.8 million in the same quarter a year ago.

Stocks of Pason Systems climbed over 63 per cent in 52 weeks. According to Refinitiv findings, the PSI stock had a Relative Strength Index (RSI) value of 48.76 on August 11.

Vermilion Energy completed the acquisition of Leucrotta in May. Vermilion said it successfully integrated acquisition assets, including Mica property, into the company, which is expected to enhance free cash flow (FCF) to the oil business. High commodity prices and net hedging gains mainly led to a net profit surge of 28 per cent to C$ 363 million in the second quarter of 2022 relative to Q2 2021. Vermillion declared a 33 per cent growth in its quarterly dividend to C$ 0.08, payable on October 17.

Stocks of Vermilion Energy galloped by roughly 262 per cent in 12 months. Refinitiv data suggests VET stocks to be on an upward trajectory with an RSI value of 63.68, signalling a moderate-to-high momentum on August

Athabasca Oil increased its annual production expectations to 34,000 and 35,000 barrels of oil equivalent a day (boe/d) compared to the previous range of 33,000 and 34,000 boe/d, underpinned by ‘strong’ underlying asset performance. The small-cap oil producer said that its free cash flow amounted to C$ 33.6 million in Q2 2022, higher than C$ 27.6 million in the same period a year ago.

Stocks of Athabasca swelled by over 184 per cent in 12 months. According to information from Refinitiv, ATH stocks held an RSI value of 53.13 on August 11. 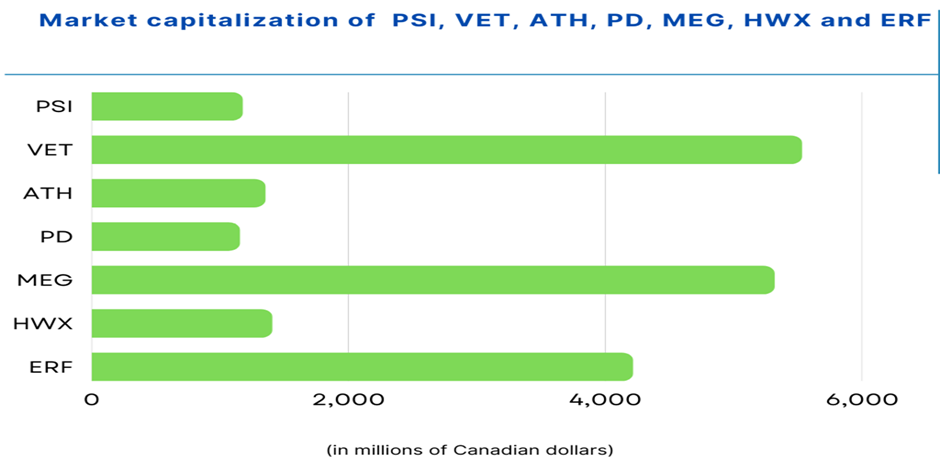 Precision Drilling is a Calgary, Alberta-headquartered firm that provides drilling, production and related services to the oil and gas players across North America. Precision Drilling said that drilling activities in North America increased by 38 per cent, which helped its quarterly revenue to reach C$ 326 million in Q2 2022, up by 62 per cent YoY. Precision also disclosed that drilling day rates jumped by 25 per cent and 30 per cent in the United States and Canada, respectively.

The MEG stock gained roughly 126 per cent in a year. According to Refinitiv data, MEG stocks had an RSI value of 52.79, with around 2.77 million shares switching hands on August 11.

Stocks of Headwater Exploration swelled by over 50 per cent in one year. On August 11, HWX stocks saw an RSI value of 55.86, based on Refinitiv findings.