Oil prices had noted quite a surge amid the concerns around a shortage of supply around the world. Earlier in October, the prices zoomed to their highest since November 2014 following an Organization of the Petroleum Exporting Countries (OPEC) panel’s decision to increase the energy supply by 400,000 barrels per day next month.

Additionally, Canada’s weekly oil exports to the US expanded to 4.04 million barrels per day in October to hit its highest volume year-to-date (YTD), the Energy Information Administration (EIA) reported on Wednesday, October 6. This surge was likely caused in part by the start of Enbridge Inc’s (TSX:ENB) Line 3 crude pipeline after years of waiting.

With so much going on in the energy space, let us look at some of the best Toronto Stock Exchange-listed oil stocks that investors can look at.

Baytex Energy was not only one of the most highly traded stocks as of October 19, with a 10-day average trading volume of about 5.5 million, but was also among the top energy companies on the TSX.

The Canadian oil enterprise saw its scrips surge by about 450 per cent year-to-date (YTD) and gain a significant 754 per cent year-over-year (YoY). 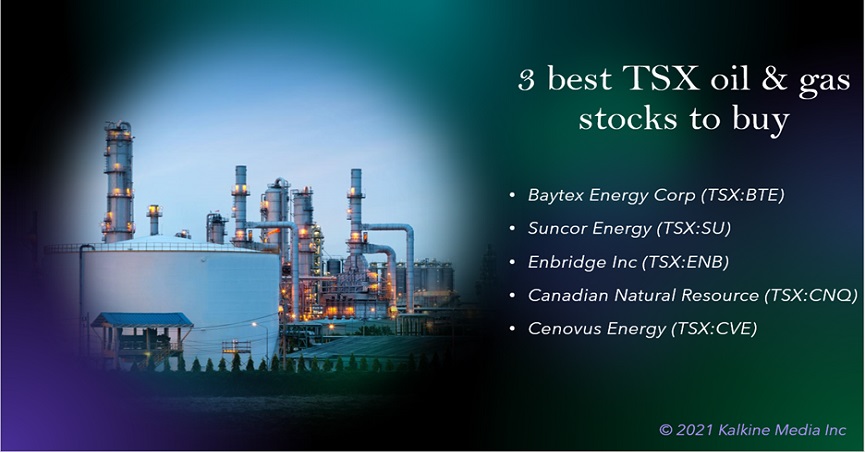 As of October 19, the energy player held a market cap of about C$ 42 billion and a share movement volume of 7.47 million on average for the past 10 days.

The Calgary, Alberta-based oil producer’s stocks noted a one-year gain of 83 per cent and growth of 9.25 per cent on a month-to-date (MTD) basis.

After years of delay, Enbridge finally kickstarted its Line 3 crude pipeline, spanning from Alberta’s Edmonton to Superior, Wisconsin, in the US, earlier in October.

The new and improved pipeline is said to be equipped to ferry about 760,000 barrels of oil in a day, which is almost twice the size of the older pipeline.

As for its stock performance, Enbridge shares grew by almost 30 per cent this year and expanded by almost 13 per cent in the past six months.

Stocks of this Canadian oil player surged by 23.5 in the past one month and recorded a 10-day average trading volume of over six million, as of October 19.

Apart from securing a place among the most active and top energy stocks, Cenovus Energy was also one of the top TSX price performers so far this month.

The ongoing energy supply shortage around the world has given way to increased concerns among investors, something that has been causing significant fluctuations in oil prices. Hence, energy stocks are likely to see some ups and downs as well.

However, with the US facing shrunken oil supplies from the OPEC+, Latin America, etc, Canada can see an increased oil demand from south of the border in the coming weeks.

This demand for oil exports, some market experts believe, can further be boosted due to the initiation of Enbridge Inc’s Line 3 crude pipeline.

If the demand for crude export from south of the border stays elevated, it is likely to increase the performance of Canadian energy producers and, in turn, impact energy stocks.