BoC rate hike: Here's what should you know about TSX's big bank stocks

The Bank of Canada raised its benchmark rates by 50 basis points to one per cent on Wednesday, April 13. As a result, the big five banks led by Royal Bank of Canada (TSX: RY) also lifted their prime lending rate to 3.2 per cent.

Notably, the changes in prime rates are effective from Thursday, April 14.

While increasing the interest rates, the central bank said it aims to fight inflation. In addition, the Bank of Canada indicated that there is a possibility of further rate hikes until inflation cools down to a target of two per cent.

Any further rise in policy interest rates in the future could be followed by high prime rates from the big five lenders. That said, let us glance at the top five lenders in Canada.

Royal Bank of Canada was the first to change its prime rate to 3.2 per cent. It currently pays a quarterly dividend of C$ 1.20 per share. RBC scrip zoomed by over 16 per cent in the past year.

Meanwhile, the Royal Bank launched a China-centric equity fund on April 11. The fund aims to provide China-based investment opportunities to investors in the United States.

Toronto-Dominion Bank has a market capitalization of over C$ 170 billion and holds a return on equity (ROE) of nearly 16 per cent. It doles out a quarterly dividend of C$ 0.89 per share when writing this.

TD stock swelled by almost 13 per cent in the last 12 months.

BNS stock gained by nearly 10 per cent over the last year. 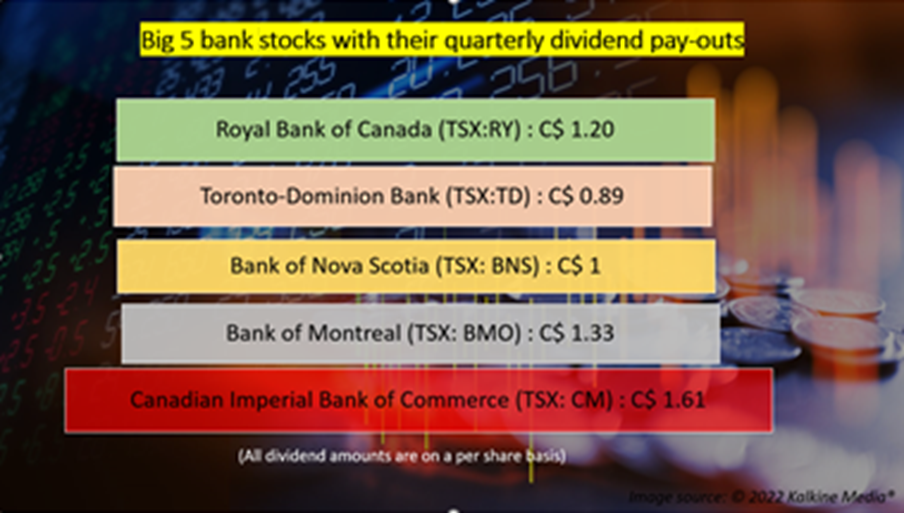 BMO stock surged by approximately 25 per cent in 12 months.

CM scrip expanded by around 17 per cent in the past year.

Interest rates could help minimize excessive demand and bring down inflation in the economy. However, investors should consider all macro-economic and micro-economic aspects that can impact any stock's performance while planning investments.