Dividend-paying stocks can be explored amid rising inflation to try and get extra income to tackle the rising cost of goods and services.

The above stocks pay dividends regularly, which could be a reason to explore. Let's explore these stocks, curated by Kalkine Media® that distributes dividends:

The company said its C$ 4 billion annual capital plan is in place, of which approximately C$ 1.9 billion was already invested during the first half of 2022.

The C$ 111.93 billion market cap company, Enbridge Inc., is a global pipeline company based in Calgary, Alberta. For the quarter that ended June 30, 2022, Enbridge earned C$ 486 million in total operating revenues, compared to C$ 423 million in the same quarter in 2021.

Enbridge maintained a balance of C$ 6,976 million at the end of the second quarter of fiscal 2022, noting an increase of 5.4 per cent from the balance in the previous year's corresponding quarter of C$ 6,618 million.

A formidable freight railway, the Canadian National Railway Company operates in Canada and the US in its midwestern and southern states. The Montreal, Quebec-based company has a market valuation of C$ 108.23 billion.

The CNR stock also saw a surge of close to 10 per cent on a quarter-to-date (QTD) basis. Its Relative Strength Index of 51.34, as per Refinitiv on September 14, 2022, indicates a moderate stock condition. 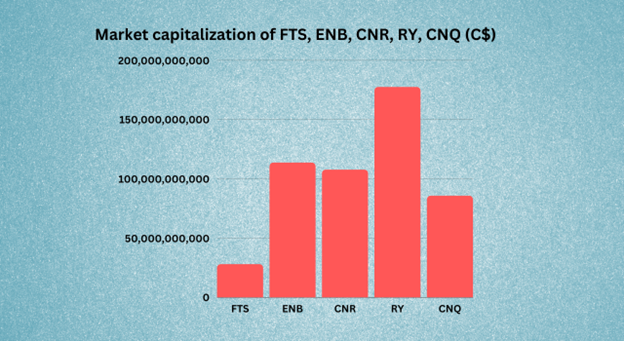 Royal Bank of Canada is the largest bank in Canada by market capitalization at C$ 176.6 billion. It has a client base of over 17 million, with more than 89,000 employees worldwide.

The Toronto-based company distributes a quarterly dividend of C$ 1.28 per share. The next slated payable date for the dividend is November 24, 2022.

The Royal Bank of Canada, in its third quarter of fiscal 2022, earned a net income of C$ 3.6 billion, which is a slump of 17 per cent YoY hit by unfavourable macroeconomic conditions that are plaguing the world right now.

The company said its net income of C$ 186 million in the insurance segment also plunged 21 per cent YoY. Compared to the preceding quarter, its insurance net income shrank by C$ 20 million, triggered by a less favourable claims experience.

However, the RY stock can be said to have a moderate condition at the moment, as indicated by an RSI value of 54.16 shown on Refinitiv for September 14, 2022.

Canadian Natural Resources Limited (CNRL), which primarily operates in the Western provinces of Canada in British Columbia, is a renowned and old Canadian oil and natural gas company.

CNRL is an C$ 83.3 billion company headquartered in Calgary. The company distributes a quarterly dividend of C$ 0.75. CNRL has regularly paid quarterly dividends since 2001 and is next payable on October 5, 2022.

The CNQ stock also saw an increase of 37.86 per cent YTD while jumping 6.5 per cent in the latest quarter.

The above dividend-paying stocks can be a good option for investors as they have projected steady growth over the period. However, markets are unstable at the moment and looking at the volatility since the start of this year, and only a long-term strategy can provide a safety net to traders.

Please note, the above content constitutes a very preliminary observation based on the industry and is of limited scope without any in-depth fundamental valuation or technical analysis. Any interest in stocks or sectors should be thoroughly evaluated taking into consideration the associated risks.