The outbreak of COVID-19 has had a severe impact on the tourism sector worldwide, with global lockdowns and restrictions on travel. As the world emerges from the dark clouds of COVID-19, the theme for World Tourism Day 2021 is ‘Tourism for Inclusive Growth’.

Let us look at some of the Canadian travel stocks.

One of Canada’s most important transport companies, the Canadian National Railway is a world-class railway network that transports natural resources and finished goods across North America each year.

In the second quarter of the fiscal year 2021, Canadian National Railway posted revenue of C$ 3.6 billion, up 12 per cent Year-over-Year (YoY). Its operating ratio was 61.6 per cent in the same quarter.

In the same quarter, a merger deal between Canadian National Railway Corporation and Kansas City Southern was announced, and the merger deal was valued at US$ 33.6 billion.

On September 29, Canadian National Railway is expected to issue a quarterly dividend of C$ 0.615. The five-year average dividend growth was 10.76, and the dividend yield stood at 1.67 per cent on September 27. 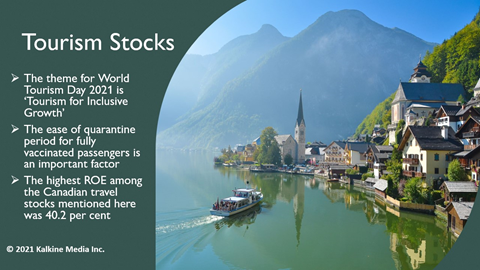 The largest airline of Canada caters to 50 million passengers globally each year.  The spread of COVID-19 severely affected the airline industry due to the global lockdown in 2020. The ease of travel restriction and relaxation of the quarantine period for fully vaccinated passengers are some of the key highlights in Q2 FY21.

The airline posted operating revenue of C$ 837 million and a net loss of C$ 1.17 billion in Q2 FY21. The cash burn of the company was C$ 8 million per day during the same quarter.

The railway network serves as the transcontinental railway between the United States and Canada, connecting all the major ports of the eastern and western coasts. Canadian Pacific Railway provides transportation, logistics, and supply chain services.

On October 25, Canadian Pacific Railway is scheduled to roll out a quarterly dividend of C$ 0.19 per share. The five-year dividend growth was 17.2 per cent, and the dividend yield was 0.91 per cent on September 27.

The stock price of Canadian Pacific Railway reached its 52-week high of C$ 100 (June 2) and it closed at C$ 83.29 on September 24. Over the past year, the stock returned close to four per cent.

The tourism company organizes and markets a wide range of services catering to hotel booking, vacation packages, and airline ticket bookings. The market cap of Transat A.T was C$ 170.23 million, and outstanding shares were 37.75 million on September 27.

On September 24, the stock price of Transat A.T closed at C$ 4.51. On a quarter-to-date (QTD) basis, the stock price dipped by 27 per cent. However, it increased by 13 per cent over the past year.

The company resumed its operations on July 30, after a collapse in demand and passenger traffic in 2020 at the outbreak of the pandemic.

The stock price of Avante Logixx expanded by nearly 46 per cent on a year-to-date (YTD) basis and rocketed by 110 per cent over the past year. It closed at C$ 2.1 on September 24, trading roughly seven per cent below its 52-week high of C$ 2.25 (September 22) on this day.