Statistics Canada recently revealed that wholesale sales slightly increased (up by 0.1 per cent) in June, with sales of motor vehicles, including parts and accessories, reaching C$ 12.2 billion, up by 3.1 per cent from May. According to the latest wholesale trade report, this increase came as the motor vehicles industry saw a sales growth of 5.3 per cent to C$ 9.6 billion.

Notably, the StatsCan report revealed that motor vehicle sales were up by 27.4 per cent year-over-year in June. Keeping these latest numbers in mind, Kalkine Media® presents some Canadian automobile stocks that one can explore.

Magna International is currently among the top consumer goods stocks based on the largest price gains in the last 30 days, according to the TMX site.

The Canadian auto parts supplier reported sales of US$ 9.36 billion in Q2 2022, increasing by four per cent year-over-year (YoY). This sales growth was primarily driven by global light vehicle production, which increased by two per cent and strengthened by 14 per cent growth in North America. Magna’s Board of Directors approved a quarterly dividend of US$ 0.45, timed to be delivered on August 26.

The MG stock gained nearly 18 per cent quarter-to-date (QTD). On August 15, Magna stock had a Relative Strength Index (RSI) value of 61.62 (pointing to a medium-to-high momentum), as per Refinitiv information.

AutoCanada recently revealed acquiring Kelleher Ford to expand its presence in western Manitoba. Kelleher is a new and used vehicles Ford dealership, including a collision centre, situated in Brandon with operational history of over 25 years. AutoCanada highlighted that this acquisition marks its second Ford dealership and generates annual revenue exceeding C$ 50 million.

The ACQ stock jumped by about nine per cent in one month. According to Refinitiv data, this small-cap stock appears to be gaining momentum on August 15, with an RSI value of 61.13. 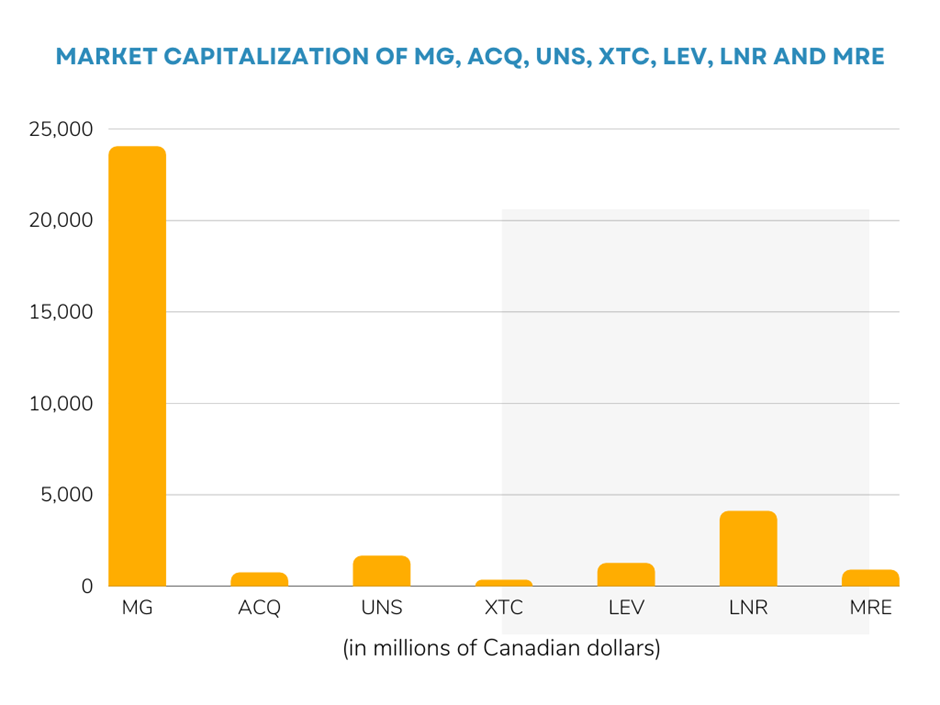 Uni-Select saw its total revenue at US$ 444.3 million in Q2 2022, representing an increase of US$ 27.9 million compared to Q2 2021. With organic growth of 10.8 per cent, the small-cap automotive product distributor reported a positive organic surge across the three segments: FinishMaster, Canadian Automotive Group, and GSF Car Parts.

The UNS stock galloped by almost 116 per cent in 12 months. Refinitiv data suggest UNC scrips be on an uptrend as its RSI was 68.39 on August 15, nearing the overbought level of 70.

The XTC stock zoomed by over 13 per cent in one month. According to Refinitiv findings, Exco stock possessed an RSI value of 65.25 on August 15.

The LEV stock swelled by roughly 22 per cent QTD. The RSI value of the LEV stock was 52.01 on August 15, as per Refinitiv information.

Linamar is a mid-cap company manufacturing engineered components and systems for electric and traditional vehicle applications.

The LNR stock spiked by almost 29 per cent in three months. Also, Linamar stock seems to be gaining momentum in the market as its RSI reached 68.71 on August 15 (nearing the overbought mark).

Martinrea International recently announced a quarterly cash dividend of C$ 0.05 to be paid on October 15, stating its financial results for Q2 2022. Martinrea said its total sales amounted to C$ 1.11 billion in the latest quarter, reflecting YoY growth of 25.9 per cent. The small-cap firm saw its net profit rise slightly to C$ 25.47 million in Q2 2022 compared to C$ 23.95 million a year ago.

The MRE stock grew by nearly 36 per cent in one month. As per Refinitiv data, MRE stock had a high RSI value of 79.75 on August 15, which generally signals an overbought market situation for the given stock.

The national data agency said that motor vehicle sales might continue to fluctuate monthly considering manufacturing challenges arising from the current supply chain bottlenecks, especially semiconductors. However, motor vehicles and parts sales, on an annual basis, jumped by 12 per cent in June 2022.