On Friday, March 19, the world gets to celebrate a day solely dedicated to sleep. While it could be easily misinterpreted, World Sleep Day, unfortunately, is not a day reserved for lazing around on the couch. It is actually an annual event to raise awareness about sleep disorders and promote the benefits of a healthy sleep schedule.

Based on the data procured over 94,000 nights, sleep tracking app SleepScore Labs found that its Canadians users were getting about six hours of sleep on an average every night, far below the recommended span of 7-9 hours. In terms of falling asleep, on the other hand, the study found that about 79 per cent of Canadian users fell asleep within the advised range of five to 30 minutes.

So, in the spirit of celebrating World Sleep Day, how about learning about a Toronto Stock Exchange-listed mattress stock that has been performing well over the past year? Let’s dive in.

Founded in 1994, Sleep Country Canada is a Toronto-headquartered mattress retailer that has over 265 stores operating across the country. Its stock is currently trending high on the TSX among the top consumer companies and in terms of its price performance.

The mattress company announced on Tuesday, March 16, that it will be celebrating World Sleep Day on Friday by collaborating with Californian firm SleepScore Labs to study the sleeping patterns of Canadians.

Sleep Country Canada share recorded a growth of over 232 per cent in the past one year. In 2021, it has grown nearly 18 per cent to date.

The company also pays a quarterly dividend that posts a five-year growth of 20.61 per cent, as per TMX data. At C$ 0.195 per share, its dividend yield at the moment stands at 2.499 per cent.

Stocks of Sleep Country Canada zoomed to a high of C$ 31.06 on March 3 after the company released what it called “record breaking” 2020 fourth quarter results.

The Toronto-based mattress retailer’s revenue for the fourth quarter surged by 33.4 per cent YoY to C$ 248.9 million.

As lockdown forced its outlets to remain shut for about 10.5 per cent of Q4 2020’s operating days, Sleep Country’s online sales surged for the third consecutive quarter and contributed to 20.1 per cent of the total revenue. 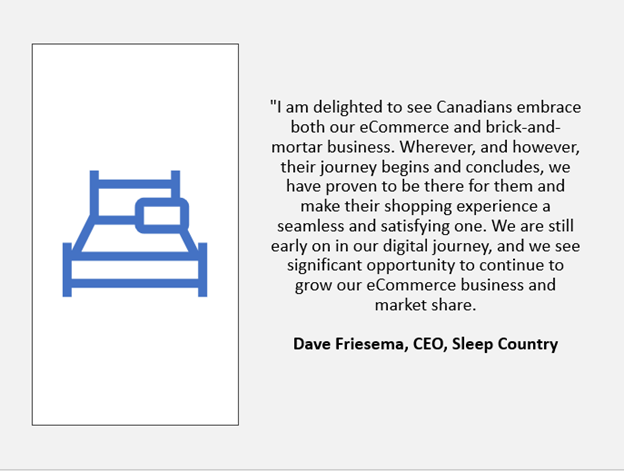