The Toronto-based multinational mass media and entertainment company Corus Entertainment Inc. (TSX:CJR.B) announced results for the fourth quarter of this year and said it achieved a net income of C$ 19.9 million, down from C$ 30.3 million in the same quarter of fiscal 2020.

The company has two major operating segments- Television and Radio. Both the segments recorded a surge in revenues in Q4 2021. The television segment's revenue increased by 12 per cent YoY, and Radio's climbed by 32 per cent in the same period. 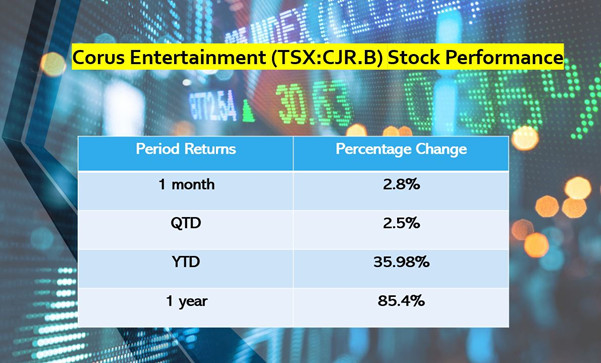 The media and entertainment company's stock expanded by about 36 per cent year-to-date (YTD) and 85.4 per cent since the last twelve months.

On April 12, 2021, the CJR stock clocked a 52-week high of C$ 6.535 per share and ever since then, the stock seems to have remained undervalued. Despite solid financial performance compared to the previous year, the stock has not breached the 52-week high.

At market close on October 21, the CJR stock was priced at C$ 5.82 apiece, and it could surge in future as the company seems to be on an upward trajectory.