After a failed attempt to launch an initial public offering (IPO) in 2019, WeWork Inc (NYSE: WE, WE:US) has finally completed all procedures to get publicly listed in the stock markets.

The debutant stock surged by over 13 per cent on its first trading day on Thursday, October 21, to close at a price of US$ 1.4 apiece.

Founded in SoHo, New York in 2010, WeWork has made its space in the North American commercial real estate sector over the years. The office-leasing company is primarily in the business of designing and developing physical and virtual shared workspaces.

WeWork had first tried its hand at going public in 2019, via the traditional procedure of an IPO. However, the plan had hit a wall when investors  voiced their concerns regarding its business structure, corporate governance and the “extravagant” lifestyle of co-founder and former CEO Adam Neumann.

Investors were also reportedly skeptical after WeWork reported a massive loss of nearly US$ 2 billion in its IPO fillings, which also noted that the company is set to burn through its remaining cash.

As investors and media reports continued to raise fingers at Mr Neumann’s business management styles and possible illegal activities, the co-founder finally stepped down from his post in September 2019. Soon after, real estate executive Sandeep Mathrani took his place.

WeWork was left to deal with much trouble in the months following its failed IPO, including reported probes by the New York Attorney General as well as the US Securities and Exchange Commission.

Then came the COVID-19 pandemic, which saw WeWork incur significant losses and many rounds of layoffs as lockdowns led to office spaces being shut down across the world.

Finally, earlier in 2021, WeWork decided to explore the route of a SPAC merger, which had been quite popular amid the coronavirus-induced economic slowdown last year.

Near the end of March this year, the distressed real estate giant announced its plans to combine with BowX Acquisition.

Following the announcement, stocks of the blank check company – then listed under the ticker of ‘BOWX’ on the NASDAQ platform –  had shot up by more than 20 per cent on March 26. 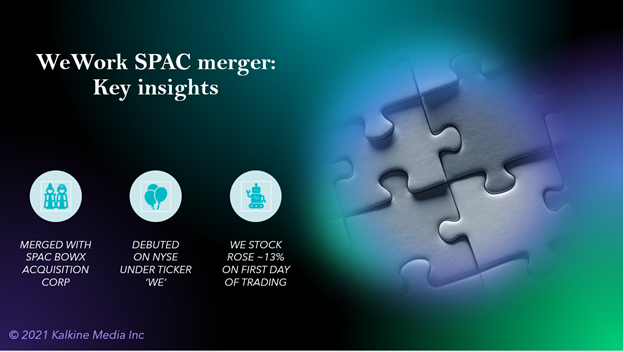 The SPAC deal is said to have brought WeWork’s valuation to about US$ 9 billion including its existing debt.

This valuation was reportedly a steep decline from that of US$ 47 billion in 2019, when SoftBank Group valued it.

SoftBank, via its Vision Fund, is said to have made multi-billion dollar investments in WeWork, something that SoftBank CEO Masayoshi Son went on to publicly regret at an earnings presentation in 2020.

Now, SoftBank has reportedly preserved its majority stake in the company as a part of the SPAC merger deal. However, a Reuters report quoting sources said that SoftBank has settled on a one-year lock-up on their shares.

WeWork has reported that in Q3 2021, its preliminary revenue totaled at US$ 658 million, noting a year-over-year (YoY) increase of about 10 per cent.

CEO Sandeep Mathrani believes workplaces around the world are reimagined in the wake of the pandemic, WeWork is “uniquely positioned” to provide the space and services.