Initial public offerings (IPO) have boomed despite the pandemic in the past year. In Canada, the Toronto Stock Exchange’s (TSX) parent company TMX Group Ltd is said to have recorded its highest level of IPOs since July last year, with toplines and earnings soaring past expectations.

The significant boom in capital markets is said to have continued in the second quarter of 2021, with an expanding number of enterprises drawing investors to their IPOs and follow-on equity deals.

Some market experts believe that this trend is likely to continue as the pipeline for public debuts remains “robust”, as per media reports.

If that’s the case, why not take a look at some upcoming IPOs for Canada and the US?

Dutch Bros IPO : Wake up and smell the coffee for this debut

Dutch Bros Inc, said to be the biggest drive-through coffee chain in the US, is set to hit the public trading markets on Wednesday, September 15, under the ticker of ‘BROS’.

Dutch Bros announced on Tuesday that it plans to sell about 21.05 million of its Class A common stock shares for a price of US$ 23 apiece at its IPO. The IPO, which opens on Wednesday, is expected to be completed by Friday, September 17.

The coffee chain aims to debut on the New York Stock Exchange.

Also read: Dutch Bros Coffee IPO: How to invest in this stock? 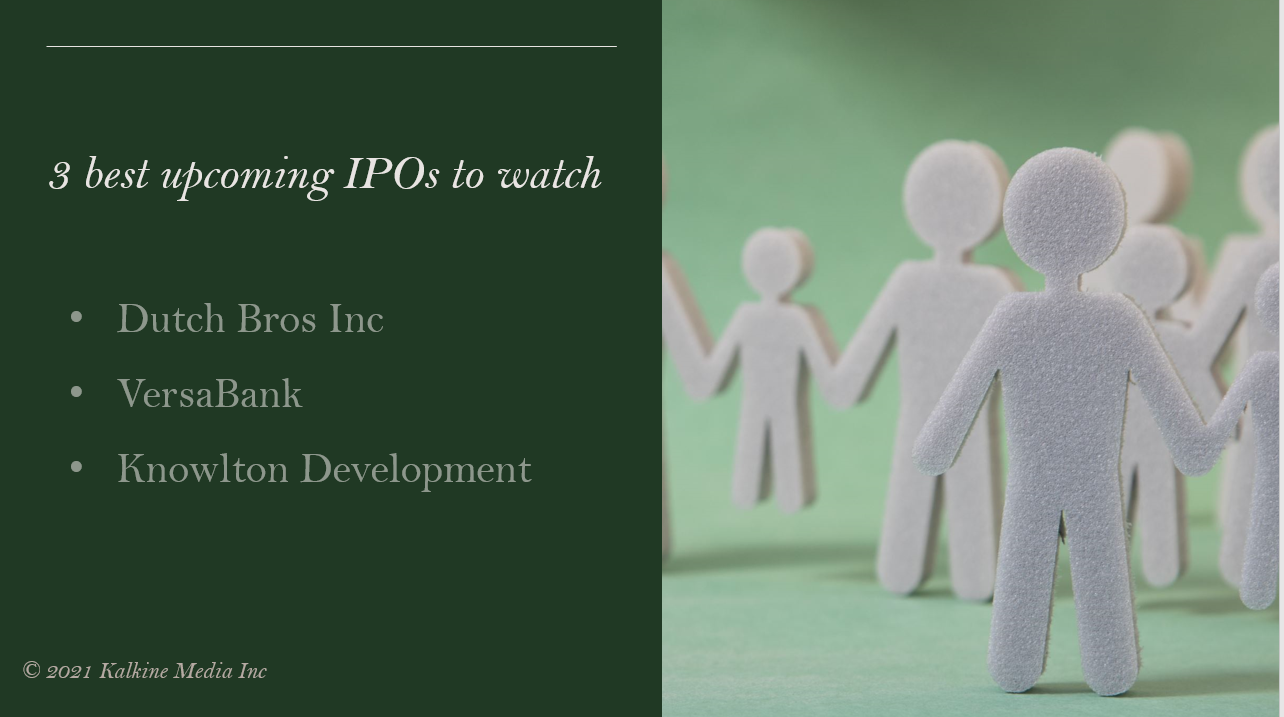 VersaBank IPO: A fintech debut to keep an eye on

VersaBank already trades on the TSX under the ticker of ‘VB’. Now, the  Canadian chartered bank is looking to go public in the markets south of the border as well.

The London, Ontario-based banking enterprise announced on Monday, September 13, that it has applied for a listing on the Nasdaq Global Select Market under the ticker of ‘VBNK’.

VersaBank, which went public in Canada in 2013, has issued a preliminary prospectus locally as well.

VersaBank is reportedly looking to raise gross proceed of about US$ 50 million from its IPO. As per its prospectus, the proceeds generated have been earmarked for general banking purposes.

Following the offering, the fintech firm plans to continue to exploring expansion opportunities. It also plans to look into a potential expansion of its point-of-sale financing business in the US, as per its filing.

Wealth management firm Raymond James & Associates is set to act as the sole bookrunning manager for VersaBank’s IPO, while Keefe, Bruyette & Woods takes up the role of co-manager.

Knowlton Development is one of the latest companies to join the IPO pipelines. An interesting thing about this Canadian beauty and home care company’s IPO plans is that it is looking to get a dual listing in Canada as well as the US.

In its homeland, Knowlton plans to go on the TSX under the ticker of ‘KDC’. In the markets south of the border, Knowlton is looking to put up its shares on the New York Stock Exchange under the same ticker.

While revealing its IPO plans on Tuesday, September 14, Knowlton Development said that it is seeking to raise up to US$ 857.14 million from its IPO in the US. At this level, the care product manufacturer’s valuation is expected to be more than US$ 3 billion.

The Longueuil, Québec-based enterprise is looking to sell about 57.1 million shares for a price of US$ 13 to US$ 15 apiece at its IPO, as per its regulatory filing.

With the IPO pipeline expected to remain strong this year, more companies are likely to get encouraged to explore their public debut opportunities. While pre-IPO shares could be an option for investors to take a look at, one should keep in mind the risks involved and do their due research accordingly.