Diversified and experienced explorer and miner Shree Minerals Ltd. (ASX:SHH) released the activity report for the June quarter emphasizing on securing new gold and base metals exploration projects as well as inched towards the resumption of mining operations at the flagship Nelson Bay River Iron Project.

Shree Minerals announced entering into a farm-in and JV agreement in June to explore the gold and base metals tenements at the Territory Lithium Pty Limited’s (TLPL) Box Hole, Edwards Creek and Bruce Gold Projects in the Northern Territory. Arunta Joint Venture has popularly known the Joint venture between the Lithium and diversified explorer counterparts. 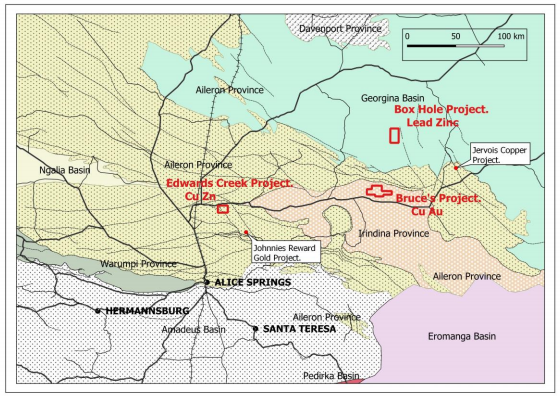 As per the terms and conditions of the Joint Venture partnership-

Edwards Creek Project – The historical exploration showcased similarities of the Cu-Au mineralisation with the Johnnies Creek copper-gold project and the Jervois Copper Project. The deposit type is interpreted to be metamorphosed volcanic massive sulphide.

Shree believes that the anomaly source has not been effectively interpreted. Further, Shree plans to reassess historical exploration data and carry out reconnaissance work and sampling program.

Box Hole Project – The project hosted historical non-mechanised galena mining in the 1960s with almost 15 tonnes of galena being mined along with lead, Silver and Bismuth to be processed at the Broken Hill Smelter.

The IP, gravity, geochemical surveys and a shallow drilling program was conducted by Uramet Minerals in 2007-09 resulting in intersections of-

The processing and modelling of the IP and gravity data is planned to be utilised to identify priority target areas. Upon the selection of priority targets, a dense soil sampling program is anticipated on the coincident gravity, magnetic and geochemical anomalies.

Bruce Gold-Copper Project – Shree has already identified additional quartz veins across the project area from the interpretation of the regional aerial imagery. A field reconnaissance program, an Ultra-fine soil sampling or an auger or RAB drilling program may be scheduled to test the geochemical samples within the Bruce project area.

Shree lodged 2 exploration license applications namely, E63/2046 and E63/2048 or Dundas project, in Western Australia. The tenement has been subjected to minimal expiration activities mostly due to the covering of a 5-10-meters blanket of transported cover over the surface. 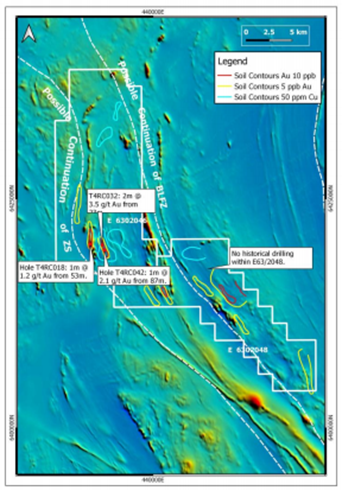 New prospective exploration ground in the neighbourhood of Golden Chimney

Aberfoyle during the 1995-96 period conducted an aeromagnetic interpretation, soil and vacuum drilling and RAB and RC drilling at the Ulysses South Project. The RAB hole resulted in intersections with gold mineralisation including –

Shree plans a reconnaissance air core drilling close to the historical drill holes upon the granting of the tenement. Further anomalous drilling intersections are planned to be tested during the successive RC drilling programs.

While the pandemic impacted site exploration activities at the Golden Chimney, significant progress was achieved on the interpretation of the geology and the selection of the priority targets.

The Nelson Bay River Iron ore mining operations are located in north-western Tasmania. Shree pioneered the concept of an iron ore DSO in the region and produced the direct shipping Iron Ore (Fines & Lump) products before placing the operations on hold and maintenance in June 2014 due to low iron ore price environment. 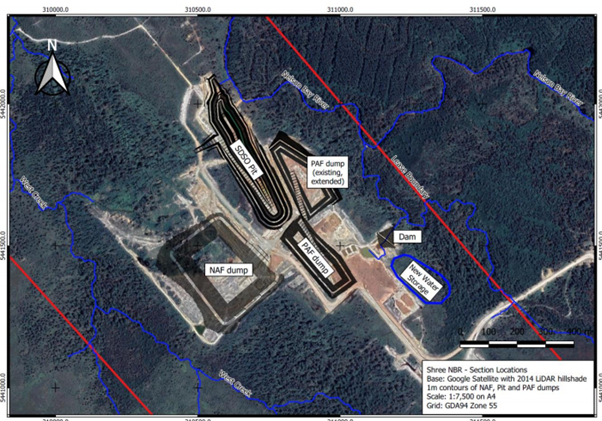 With the strengthening of the iron ore prices, Shree seeks to resume the mining operations and seeks an environmental permit from the Tasmanian EPA. The industry seeks the NBR product due to the low content of impurities such as alumina at only 1.3%.

The activities during the June quarter were impacted by the pandemic, Shree plans to finalise the DPEMP in coordination with the EPA to advance to further permitting stages. The tentative finalisation of the DPEMP is anticipated by the end of the year, which will put Shree in a position to take the final decision on the resumption in 2021.