The exploration prospects of Golden State Mining Limited (ASX:GSM) have further strengthened at Yule with the first batch of encouraging assay results from its Phase 2 air-core program. The Company has completed the Phase 2 reconnaissance AC drilling program undertaken on 196 holes over an advance of 15,125m at its 100%-owned Yule Project in the Mallina Basin.

The assay results have been received for the first three target areas, drilled during Phase 2 reconnaissance program, representing approximately 30% of the total samples submitted. The remaining results are expected during the rest of December 2020.

Besides, several new target areas have been identified from the target generation, which was completed on a tenement application (E45/5570), east of the current Yule project, using open file aeromagnetic data.

Drilling at Target 1 West (Yule South) was designed to test prospective structural and intrusive zones in the area. A total of 21 holes at 160-metre centres were drilled on 4 traverses (variably spaced) for an advance of 2,168 metres.

A review of open file aeromagnetic data has been completed over an exploration licence application E45/5570 to the east of the Yule project tenements by Core Geophysics Pty Ltd. The target generation identified numerous intrusive-style and prospective structural settings to be prioritised ahead of the 2021 field season. The new targets will complement previously identified targets along the Yule River Shear Zone within the tenement area.

Road Ahead for Exploration Undertakings

The information recorded so far has been sufficient to build confidence to commence the planning of a targeted drilling campaign in Q1 next year.

While one-third of the Phase 2 results have been received to date, the remainder of the targets would also influence the exact scale of the program. Nevertheless, with the combination of Phase 1 follow-up drilling, an active exploration phase of targeted AC and reverse circulation drilling is expected next year. 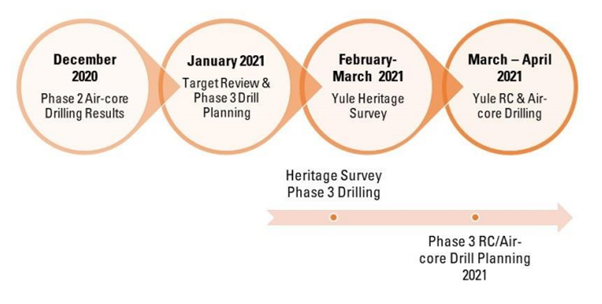