Amid the Coronavirus pandemic, the world realized the importance of adequate and advanced healthcare facilities to keep people going, especially during the health crisis like these. In many countries across the globe, what seemed to be a robust and sufficient healthcare system fell flat during the pandemic.

The ongoing health crisis has revealed several weak links and opportunities in the healthcare and healthcare infrastructure space. To deal with the ongoing situation, many companies are coming forward and investing in medical technologies to tap on this opportunity and create a more robust healthcare system.

One such company that has been in the business for a while is Nanosonics Limited (ASX: NAN) which is exclusively in the space of providing disinfecting devices.

Nanosonics’ story at a glance: Nanosonics was founded way back in 2001, headquartered in Sydney, Australia and went public in 2007. In 2009, the company launched its game-changing device, trophon for high-level disinfection (HLD) of intracavity and surface ultrasound probes which set up the base for the company. 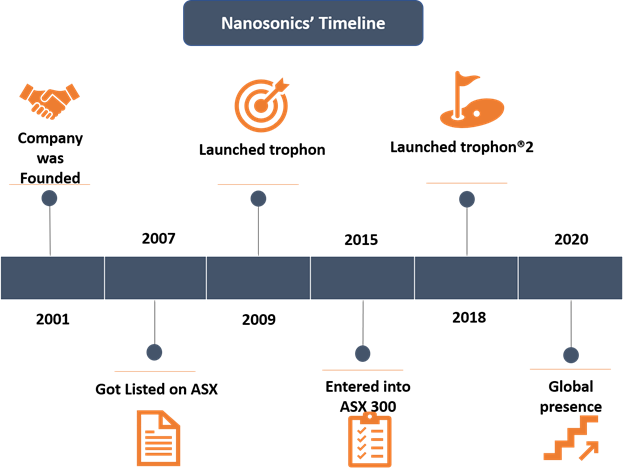 By 2015, the company had already scaled up to new highs with its expanding business and got its entry pass in prestigious ASX300 Index, which consist of 300 largest companies in Australia by market capitalization. In the follow-up year, the company entered the benchmark ASX200 Index as well.

Two years back, in 2018, the company launched another state of the art trophon®2 high-level disinfecting devices based on ultrasound technology.

Fast-forwarding to 2020, the company has made a global presence and employs more than 200 people. The technologies are available in Germany, North America, Canada, to name a few.

The company offers two devices: trophon® EPR and trophon®2, both on the same technology.

One of the USPs of the company is its diverse range of selling models under a couple of channels through which sales are being generated.

Under the Direct channel, the company uses three different models.

Under the distribution channel

The Global installed base reached new highs during FY20

The global installed base during the year grew by 13% from 20,930 units to 23,720 units. The first three quarters of the year have been good with a 37% increase in Europe and the Middle East and a 56% increase in the Asia Pacific. The North American market also witnessed growth in line with expectations. 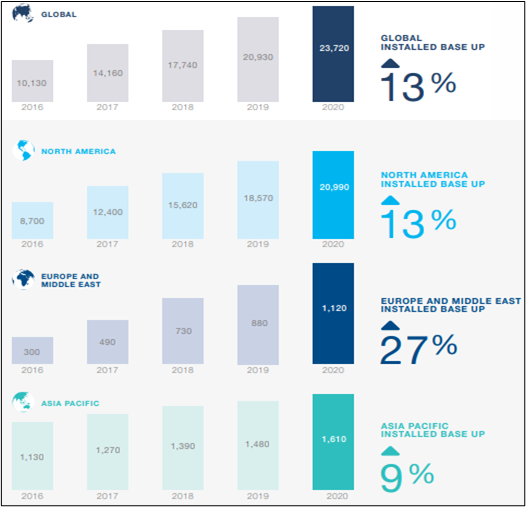 However, the growth dropped in the last quarter due to the pandemic restrictions, with no. of units going down by as much as 46%. The overall FY20 growth in the installed base stood cheerful.

Notched up revenue got negated by an increase in the operating expenses. 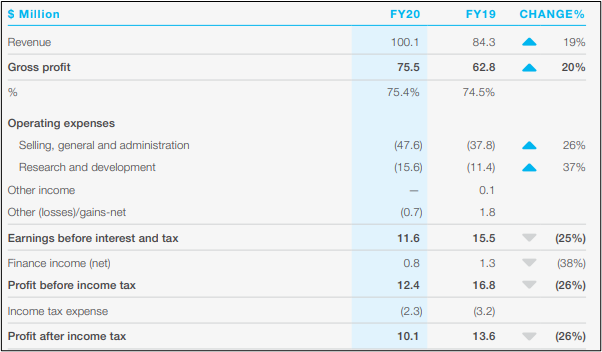 The operating expenses of the company also saw an uptick this year which negated the profits. An increase of 12% was seen in the selling, general and administration expenses from $37.8 million to $47.6 million. The cost of research and development also grew from $11.4 million to $15.6 million, majorly on account of the development of new products. 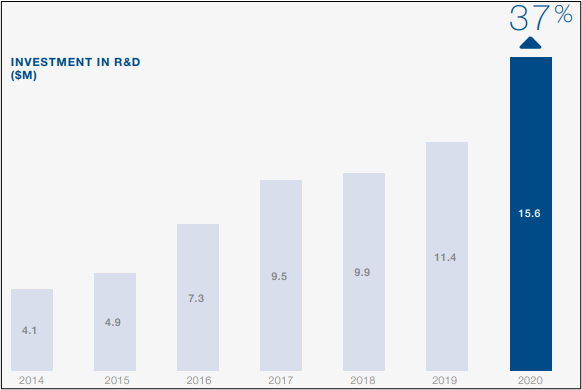 The company also took a minor loss of $100k on net foreign currency.

During FY20 the free cash flow of the company surged to $20.9 million compared to the previous year’s reporting of a mere $2.6 million, an impressive increase of more than 700% in a year. The primary reason for the surge in cash flow was due to receipts from customers.

The recent reporting of $91.8 million as at 30 June 2020 was higher by 27.1%, compared to the previous reported reserves of $72.2 million in FY19. This would help the company to support ongoing growth and expansion, especially during these challenging times.

The last five years revenue has been in been in an uptrend and has seen only one year of declining gross profit in the last five years. The company has come long way from reporting $42.8 million of revenue in 2016 to more than 130% up in 2020.

The gross profit has also followed the same trend. The FY20 gross profit of $75.5 million is a healthy growth of 20.2% over the previous corresponding period of $62.8 million. The company has posted a consecutive rise in the gross profit in the last three years.

The company has refrained from giving definite guidance for FY21 due to the ongoing uncertainties. The limited access to the hospitals during these restrictions is expected to hamper the sales of trophon equipment in the first half.

However, the cash balance of the company, coupled with the robust infrastructure continues to provide a strong foundation for the future. It continues to focus on the long-term strategic goals, resulting to which, total operating expenses for FY21 are expected to be around $75 million to $78 million. This would reflect in increased R&D spending and operational capability to support the organization globally.

Nanosonics’ share price closed the third week of November at $6.48, up by 2.2% for the week. We have seen an impressive performance this month, and the stock is already up by more than 25% from the last month’s low of A$5.12.

Compared to the broader market indices; ASX200 and ASX300 the stock has underperformed in the last one year. However, in the month of November alone, the stock coped up sharply and narrowed the gap as seen on the chart above.