After crossing the US$1,900/oz mark in May 2021, gold prices have been losing sheen. If we look at the chart below, we can see a strong support zone at US$1,680/oz level. Though the prices have been hovering around this level for over a year now, they rebounded this month. 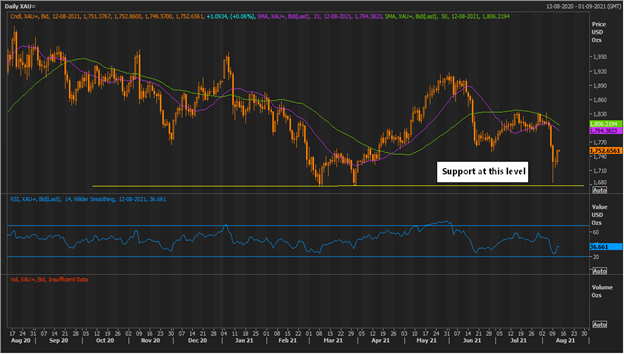 Why the dismal performance?

The strong performance of the US dollar and better US jobs data are being considered as the primary factors for the slide in the prices of the yellow metal. Also, there are concerns that the US Fed may start paring back stimulus packages for the pandemic sooner than expected.

However, this week, gold prices have shown some strength. The current revival could be seen as a reaction to the increase in cases of Delta variant in the United States. There has been a general trend of investors moving their money from equity markets to the gold commodity market with increasing coronavirus cases.

On that note, let’s have a look at how major gold players have been performing on the ASX in the current price scenario

Good read: Koonenberry Gold IPO: How to invest in this public offering

Australia’s largest gold producer Newcrest Mining has its operations spread in Canada, Papua New Guinea (PNG) and Australia. The company reported a gold production figure of 542koz at an All in Sustaining Cost (AISC) of US$797/oz for the June 2021 quarter.

Copper production stood at 38kt for the reported period. During the March 2021 quarter, the Cadia Gold Mine in New South Wales reported a negative AISC of US$160/oz, which has further dipped to US$377/oz.

NCM is a consistent dividend payer. The Company paid a dividend of AU$0.193 per share during the March 2021 quarter.

Most of the gold production came from the Kalgoorlie, Yandal and Pogo gold projects. The Company’s AISC was AU$1,850/oz for the reported period.

The Adelaide-based gold and copper miner owns and operates projects in Australia and Brazil. OZ Minerals’ June production remained at 57,875 ounces while copper production came in at 32,681 tonnes. The AISC for gold production for the reported period was US$1.345/lb.

Sandfire Resources owns and operates a producing gold and copper asset in Australia and major exploration and development projects in Botswana and the US.

Related Read: Three ASX gold stocks to light up your portfolio as gold prices heat up

Evolution Mining runs gold projects in Australia and Canada. During the June quarter, the Company’s gold production was 169,146 ounces at an AISC of AU$1,239/oz. In a major event of the last quarter, EVN completed the acquisition of Battle North Gold at Red Lake Operation in Canada.

Good read: How to invest in gold stocks in Australia?

Since the support level of US$1,680/oz has been valid for the last six months, it could be considered as a major support level for the bulls. The long-term view on gold remains positive, and the yellow metal is expected to deliver significant returns on investment.

Related read: Which are the best gold stocks on the ASX?