Troy Resources Limited (ASX:TRY) owns and operates the Karouni Gold Project in Guyana, South America. The project is in a development phase, where production and exploration are going hand in hand. Besides extracting gold from its brownfield prospects, Troy is also engaged in exploring and developing the mineralisation potential of the project through additional brownfield and greenfield exploration work.

Significantly, Troy saw its gold production surging by 75% during the March quarter. An impressive upturn over 4,195 ounces produced in the December 2020 quarter, TRY produced 7,333 ounces of gold during the March quarter at an average ore grade of 1.45g/t from its flagship Karouni Gold Project. Troy’s continuous efforts to optimise the mining operation bolstered the production.

Recent update: Troy Resources (ASX:TRY) back on track in March, beefs up gold production by 75%

Troy concluded an RC drilling campaign at its greenfield prospect Gem Creek in March 2020. The campaign commenced in April 2020 with an initial plan of 119 holes. During that phase, Troy completed 71 holes and took a break of nearly eight months to remobilise the drilling rigs to further drill the remaining 48 holes in February 2021. A total of 119 holes were drilled in two phases with a combined depth of 11,627m.

Additionally, the Company drilled four diamond drill holes on the prospect to study the geological structure and identify the mineralisation trends.  The assay results from these four holes are still pending. 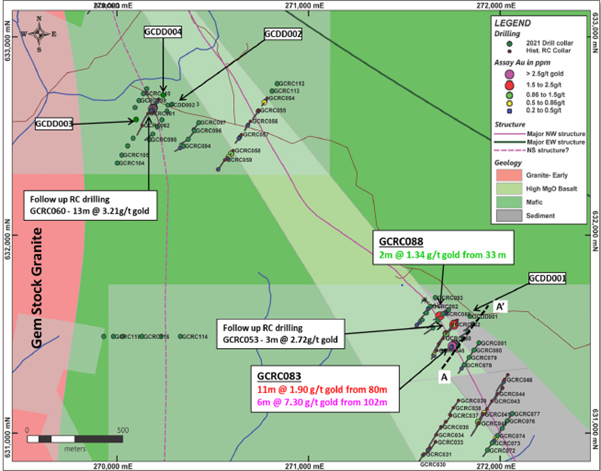 The complete assay results are still pending.  Troy will share the results as soon as they are made available.

One of the holes, GCDD001, intersected the carboniferous shale which was in contact with a felsic intrusion. The intercept showed moderate to strong pyrite dissemination.

GCDD002 hit the saprolite zone with patchy relict lamination. The hole also intersected a fault with strong fault gauge characteristics. Weak shearing on the wall rock was observed, along with weak alteration in sericite and fuchsite presence.

More clarity will come through the assay results, which would also help in planning further drilling programs.

Troy launched field mapping and auger soil sampling operation on the prospect during the December quarter. Soil sampling was carried on in an area of 300X40 m² and recovered 416 samples for analysis.

The key objective of these exploration activities was to identify structural orientations and mineralisations .

Troy will undertake further RC drilling on the greenfield prospect.