The gold explorer continued to advance the development of its Sandstone project via a substantial CY2020 drilling campaign during the period. Besides, the Company announced a maiden copper discovery, the Crosswinds Prospect, at Barkly copper-gold super-project, which provided early support for the iron oxide-copper-gold (IOCG) potential of the high-grade project.

Let us quickly scan through the key developments that shaped 2H 2020 as an eventful half year for the Company:

Middle Island commenced Phase 3 of the significant 2020 drilling campaign at Sandstone during the half year, which collectively consisted of ~54,000m of resource definition, exploration, and sterilisation drilling. 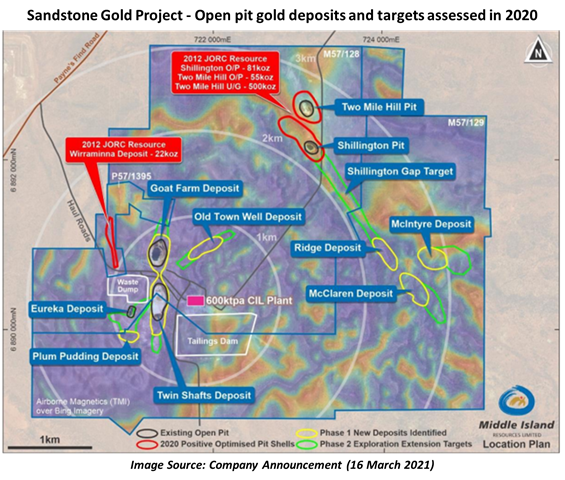 The drilling campaign turned out to be extremely successful, with the Company defining five new satellite gold deposits at the project, along with extending the existing deposits. The success of the drilling program resulted in the doubling of open-pit Mineral Resources, contributing to the Feasibility Study (FS). Middle Island expects FS to be completed by late March 2021.

Following the receipt of drilling results, the Company completed updated and maiden Mineral Resource estimates for all existing and new deposits, respectively. As of 31 December 2020, maiden and upgraded Mineral Resources aggregated 746,500oz gold at the Sandstone project.

The Company has also completed pit optimisations, Mineral Resource estimates, production scheduling and mine designs for all ten open-pit deposits at the project, in addition to designs for provisional waste dumps, haul roads, and an expanded tailings facility. However, infill, extension, and sterilisation RC drilling are still in progress. 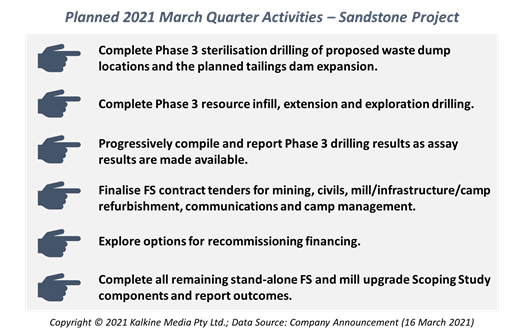 During the December half year, Middle Island identified a significant surface copper oxide mineralisation at the new Crosswinds prospect following a reconnaissance site visit to the Barkly project.

At the time of the discovery, Spot pXRF readings ranging from 24.8% to 76.2% Cu were taken. These outcomes were further confirmed by continuous composite chip sampling, totalling 130m at 0.76% copper. 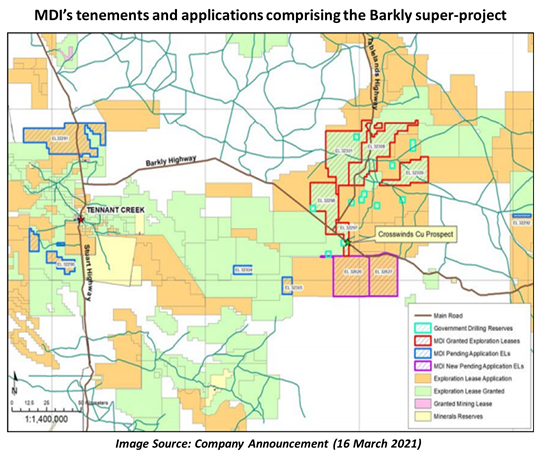 Middle Island is currently eyeing the results from the Federal and Northern Territory Government’s current ten-hole stratigraphic basement diamond drilling program. The findings from this drilling program, expected to be released in March/April 2021, are likely to provide further clarity on the basement IOCG potential of the project.

Following the release of these results, the Company intends to embark on exploration earnestly during the ensuing ‘dry season’, notionally running from April to October.

The Company closed the December half year with significant cash and liquid investments worth ~A$6.6 million, comprising ~A$2.5 million in cash and ~A$4.1 million in listed equity investments.