Golden State Mining Limited (ASX:GSM) continues to march forward on the back of strategic exploration endeavours. Taking its robust approach up a notch, the gold and base metals explorer has released an impressive update on the progress of its planned drilling activities for flagship Yule Project.

For the Yule South Project, the company has revised its planned RC drill metres from the earlier 2,500m to 4,000m and has rescheduled it to commence in May 2021. Additionally, GSM intends to commence the 15,000m Phase 3 AC drilling campaign in July or August 2021.

Additionally, GSM has noted the presence of a historic VTEM anomaly in the vicinity of the prospect, outlining the possibility of a VHMS mineralisation. Additionally, successive exploration programs have recorded elevated lead, zinc, manganese, and silver levels along with a potential distal alteration halo.

The Company plans to focus on unexplored magnetic and non-magnetic conductive sources during target selection, that may correspond to VHMS targets within the SSZ.

The planned RC drilling program for Yule South has been expanded by over 60% to over 4,000m, designed to test four gold target areas with anomalous gold and alteration vectors with follow up RC drilling to test fresh bedrock responses to the earlier recorded intersections.

The drilling program was expanded to include additional priority zones with prospective geochemistry. GSM is awaiting statutory approvals; thus, the planned RC drilling program has been rescheduled to May 2021.

Target 1 East: Magnetic inversion modelling has outlined an interpreted north dipping symmetrical anticlinal intrusive structure, which remains untested by AC drilling. The interpreted structural areas have been outlined by magnetic linear features occurring on both sides of the modelled intrusive bodies, which host numerous gold intersections recorded in Phase 1 AC drilling program. The drilling target will be tested by up to 7 RC holes.

Target 1 West: Silica and pyrite alterations have been recorded together with numerous intersections of anomalous gold mineralisation at the target. The existing indicators characterise the potential of a mineralised intrusive system at depth. GSM would be testing the target with up to 4 RC drill holes.

Target 2A: Phase 1 of AC drilling program demonstrated the presence of an 800 by 1,400m anomaly along with two gold intersections with gold grades exceeding 0.1 g/t.

Phase 2 drilling program confirmed the presence of arsenic anomaly with extensive smoky quartz and tourmaline veins associated with pyrite and chlorite-sericite alterations, indicating the presence of a potentially significant mineralised system at depth. GSM plans to test the fresh rock at the target with up to 2 RC holes.

Target 5: Petrological work indicates that mafic package within altered granitoid intrusions has undergone moderate to intense silicification with patchy sericite and pyrite alteration. The target registered numerous anomalous gold intercepts and areas with substantial magnetite and leucoxene alteration. GSM proposes a follow-up RC drilling program with up to 5 holes at the target. 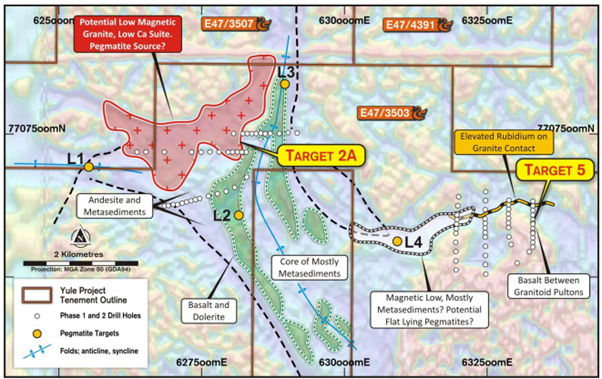 Four LCT pegmatite targets have been identified from the known lithium pathfinder analysis of the phase 1 and 2 AC program results. Currently awaiting statutory approvals, a 1,500m reverse circulation campaign will test the target areas. This program is expected to commence late in Q2 2021.

The upcoming reconnaissance 15,000m AC drilling program is aimed at testing further gold and lithium targets at Yule. Exploration tenement application (E45/5570) is expected to be granted soon, and the drilling activity will commence in Q3 2021.