Shares of Bounty Oil & Gas NL (ASX:BUY) surged 4.2% on Tuesday following the announcement related to the seismic reprocessing and preliminary Amplitude Versus Offset (AVO) analysis of the Cerberus Project in the offshore Carnarvon Basin of Western Australia.

The Oil & Gas company announced that the reprocessing of seismic data and the initial AVO analysis had substantially enhanced prospectivity and reduced the risk of hosting Dorado-lookalike drilling targets at Cerberus.

Prominent discoveries including Dorado, Phoenix South and Roc along with Pavo-1, where drilling is underway at the moment in the Bedout Sub-basin WA, are directly analogous to drill targets at Cerberus Farm-in permits.

The Preliminary AVO analysis around the Stork and Amos prospects in Cerberus Permits' southwestern area showcased characteristics similar to Dorado and associated discoveries. Furthermore, the joint operators of Bounty and Coastal Oil and Gas Pty Ltd are finalising a drilling program for two firm oil exploration wells and one contingent well.

Bounty has partnered with Coastal, a private oil company, led by industry veterans including Ted Jacobson, who was involved in transformative farmouts and oil and gas discoveries during his professional stint at Carnarvon Petroleum and Tap Oil, which also include the success of Dorado, and is now planned to be followed up with the ongoing drilling campaign at Pavo-1. 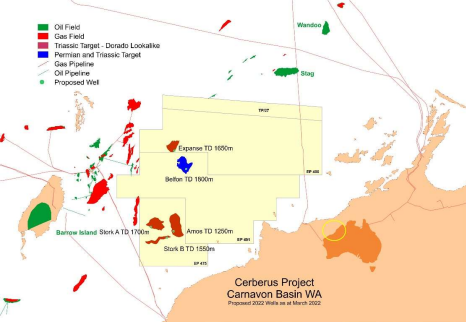 In accordance with the Farm-in agreement, Bounty has already paid funding to a dedicated joint account managed by the two partners. The two companies are currently overseeing work that would advance to drilling.

The drill program will include the following two firm wells –

Along with contingent well –

Expanse (EP 490) – Geology similar to Dorado will be targeted within a faulted Triassic block at EP 490, contingent on the success of the firm wells. The Expanse and Belfon targets are located nearby. 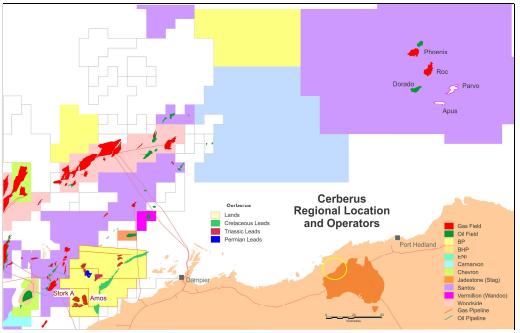 AVO seismic analysis has already commenced at primary targets to demonstrate the presence of possible hydrocarbons on seismic data. Further, prospective resources and success chances at Cerberus targets are being assessed as AVO analysis is completed.

A Request for Proposal (RFP) has been issued to the rig market and will allow the joint operators to negotiate terms of the rig contract with indicative timing of Q4, 2022, subject to regulatory approvals. Concurrently, good engineering, environmental permitting, seismic analysis, stakeholder engagement and complimentary work are progressing to drilling at the targets.

The seismic inversion and accompanying AVO analyses are anticipated to be concluded within March and will significantly de-risk the drill program.