The listing of a new exploration firm kindles curiosity in the minds of the prospective investors. One such minerals player, which is generating a lot of buzz in the run-up to its initial public offering (IPO) on the ASX is – Arcadia Minerals Limited.

Namibia-focused diversified metals exploration and development company Arcadia Minerals Limited, which is domiciled in Guernsey, has ventured out to Australia to raise capital and kickstart the next leg of growth at Tantalum, gold, Nickel, Lithium and Copper projects. Arcadia owns the advance Swanson Ta/Li project along with a suite of highly prospective gold and battery metals projects in the neighbourhood of established mining operations and significant discoveries.

The minerals projects under Arcadia’s banner include-

Arcadia seeks to raise over A$5.9 to A$6.4 million via the initial public offering to acquire Chess Depositary Interests (CDIs) over fully paid ordinary shares. Under the IPO, a minimum of 29.5 million and a maximum of 32 million CDIs would be issued at A$0.20 per CDI. The company has already released its prospectus for the IPO. The company is seeking funds to unlock the transformational journey especially at the advanced stage Swanson tantalum project. 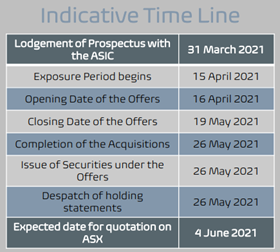 Upon the completion of the IPO, the company plans to ratchet up its exploration efforts at the advanced Swanson Ta/Li project and complete the feasibility study. Further, the company will also pursue advance exploration opportunities at its Kum-Kum, Karibib and Bitterwasser projects to tap the burgeoning renewables market.

The company’s systematic growth strategy includes prioritisation and execution of the Swanson project and other projects with regular news-flow anticipated in the upcoming times. The seasoned management and technical team include industry veterans with a strong track record of exploring, developing and operating mining projects. 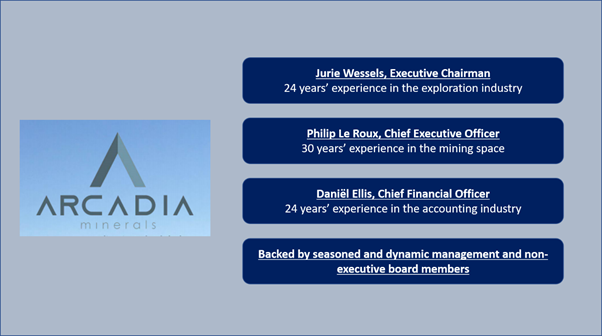 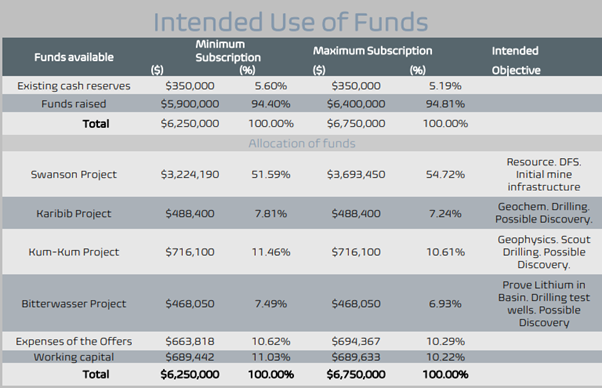 EPL 5047 is located in a mountainous desert setting with access to roads and is typically characterised by complex geological and structural setting with high prospectivity in the proximity of large shear zones such as the Tantalite Valley Shear Zone and the intrusive mafic-ultramafic body. 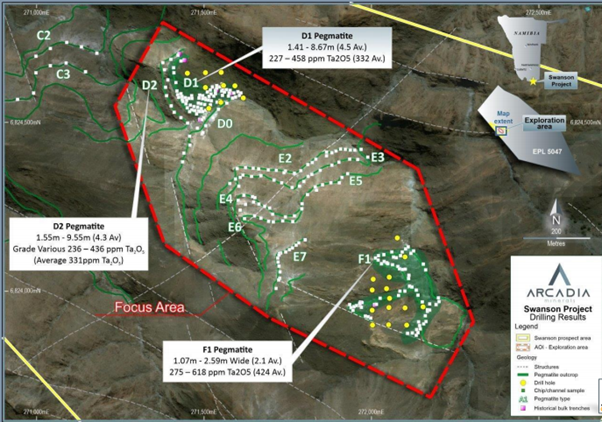 Arcadia currently focuses on mineralised pegmatites with opencast exploitation potential at the tenement. The Company sees the potential for an early cash generative operation at Swanson. The maiden drilling program drilled over 23 holes, out of which 22 intersected pegmatites with high grade Tantalum mineralisation.

The subsequent developments at Swanson will include –

The proposed exploration program would include geophysical surveying of the Tantalite Valley Complex to identify massive sulphide drill targets and for scout drilling.

The proposed exploration work will include mapping, geochemical analysis and geophysical surveys to identify and define drill targets at the prospective structural features. This will be followed up by initial Reverse Air Core and/or Reverse Circulation drilling.

Arcadia plans a three-staged exploration program at the project. The exploration work would include analysis and test work of the existing water borehole sources for lithium mineralisation. The surveys would confirm and delineate the scope and extent of the possible saline and/or brine aquifer system, which would be followed by scout drilling to determine the scope and extent of lithium-in-brines mineralisation.

For more details on the company and its prospects please click here.