In the status quo, the United States Federal Reserve Chair Jerome Powell has warned the market that the global economy might be heading towards an unprecedented recession with low inflation, which is further propelling the market sentiment around gold, which post turning negative over the short-run has again gained momentum with spot now reaching to multi-year high USD 1,765.94 per ounce (intraday high on 18 May 2020).

While the gold spot is making new highs, the recent recovery in global equity indices, which is bringing down the fear of margin calls, is now promoting the investing community to go for gold stocks amid of improved risk appetite, inferred from rising bond yields across the globe, leading towards a gush in gold stocks, which have now relatively outperformed the return from gold over the short-term (YTD), and long-term (5 years) as well. 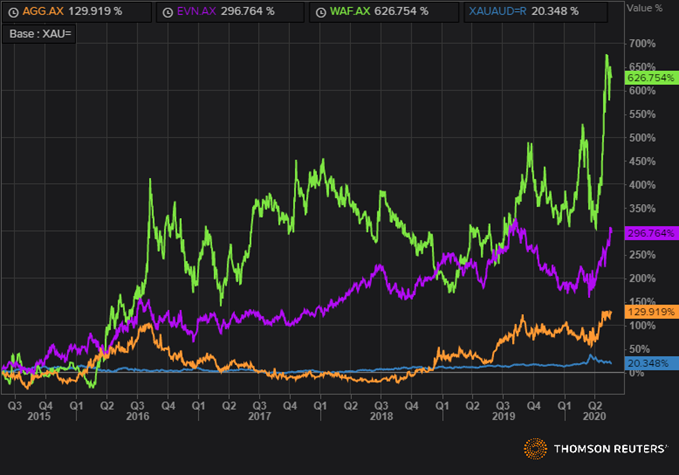 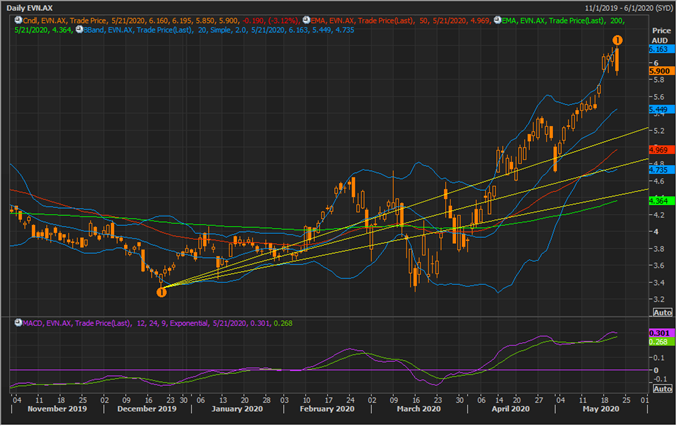 On the daily chart, EVN has currently tested the +1 Standard Deviation of the 20-day simple Bollinger band with a positive signal from the 12,26,9 MACD indicator. On connecting the recent low to the recent high through the Fibonacci fan, it could be seen that during April 2020 the stock retracted back slightly after testing the +1 SD of the Bollinger band, but found the support near the 1/3 fraction of the Fibonacci and surged again.

Currently, the stock is trading near the +1 SD and is well-above the pair of 200- and 50- day exponential moving average, reflecting on prevailing bullish sentiments around it. Over the short-term ahead, the mean value of the Bollinger band, which is a 20-day simple moving average should act as the primary support, followed by the 1/3 fraction of the Fibonacci, 50-day EMA, 2/3 Fibonacci, and -1 SD.

Also, the above-suggested levels and the 2/3 fraction of the Fibonacci fan are critical, and are currently overlapping with the mean value of the Bollinger and 50-day EMA, which makes it a decisive point ahead. 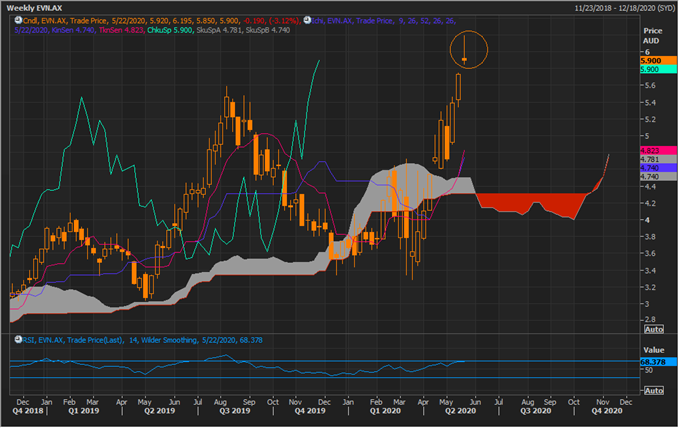 On the weekly chart, the indication from Ichimoku is confirming a strong upside momentum in the stock; however, the present week candle (which would be completed on 22 May 2020) is resembling a shooting star candle (bearish candle), and investors should look out for the breach of the present candle low next week, as a breach and trade below the low of the present candle could indicate profit booking and short-term price correction. 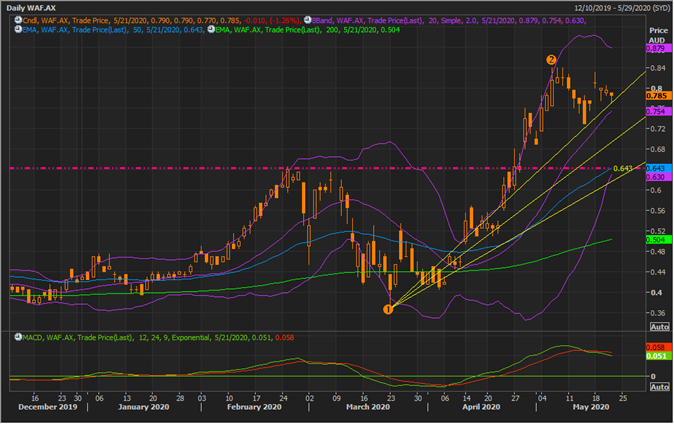 On the daily chart, it could be seen that the stock is now testing the 1/3 fraction of the Fibonacci fan, projected by connecting the recent low (1) to the recent high (2), and is currently trading above the mean value of the Bollinger band (20-day simple).

While the stock is testing its immediate support of 1/3 fraction, the 12,26,9 MACD is giving a negative signal; however, WAF is yet trading above the pair of 200- and 50-day EMAs, reflecting bullish sentiments.

In the status quo, the primary support for the stock is intact at $0.641, which is a decisive support as the 50-day EMA and the -1 SD of the Bollinger band is overlapping around the same region. Investors should monitor the level closely as a price action above the same would further seed bullish sentiments, while a break and a price action below the same would fan bearish sentiments around the stock. 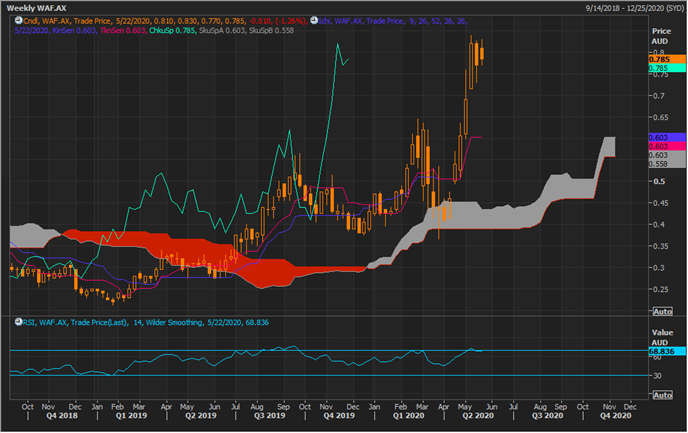 Also, the spread between Span A and Span B (mean value of 52-week high and low) is quite large, which coupled with the above mean value from 14-week RSI is indicating bull strength. 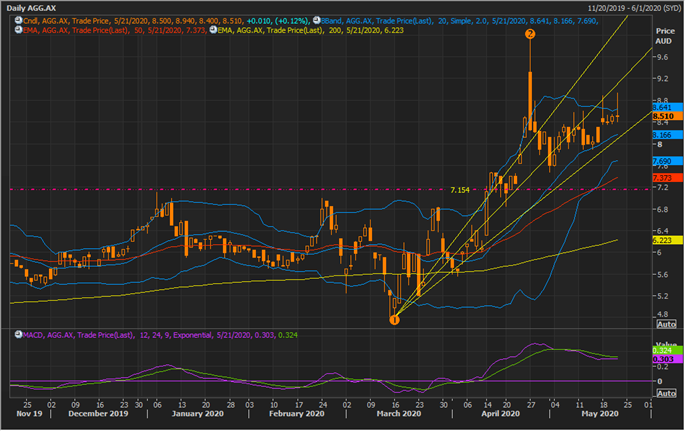 On the daily chart, the stock is currently trading below the 2/3 fraction of the Fibonacci fan, projected by connecting the recent low (1) to the recent high (2). Also, the stock tried to breach the +1 SD of the Bollinger but failed and is now retracing towards the mean value.

However, the stock is having decent support level, which needs to be breached before bears dominate the front. The immediate support for the stock is the 3/3 fraction and the mean value of the Bollinger band, and as both of them are overlapping the zone should be considered as a strong support.

Furthermore, the horizontal medium-term support for the stock is at $7.154, and as the -1 SD and 50-day are overlapping around the same level, the area should also act as a strong support zone for the stock. 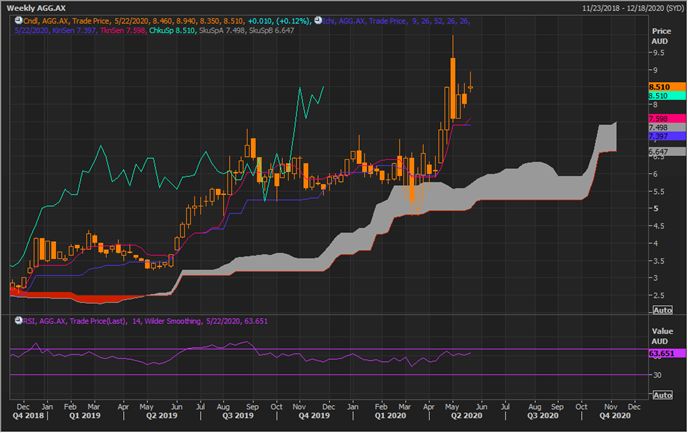 On the weekly chart, the stock is showing a strong bullish signal with prices trading above the Span A along with a positive crossover from the conversion line and the base line. The grey area should act as the support zone on the weekly timeframe.

While over the long-term the above-mentioned stock has clearly outperformed gold, the improved risk factor in the market in the status quo, is now supporting the shot-term rally in ASX-listed gold stocks, which in turn, has improved their short-term return profile as well. 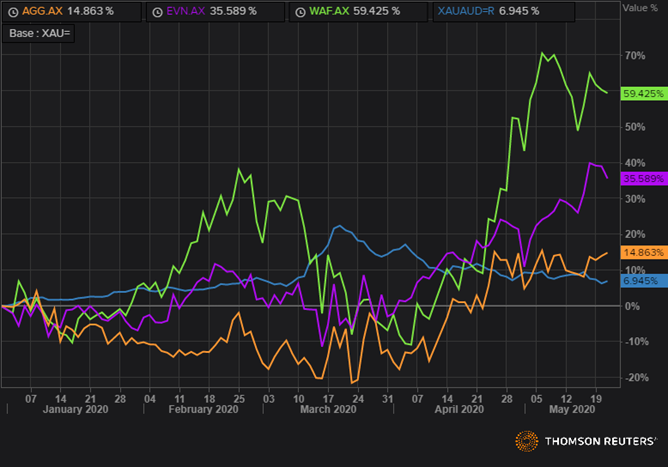