Benchmark ASX200 dropped 34.80 points, shedding 0.52% to close at 6,594.50 on Wednesday. Commodity prices likely weighed on Australian stocks. Also, energy and materials sector lost 5.81% and 5.03% respectively. Even Utilities and Industrials were on the losing side. However, Information Technology, A-REITs and Healthcare stocks pushed the ASX200 index a tad higher. Financial sector too gained investors’ attention as banking stocks are on focus after RBA’s cash rate hike yesterday.

The big four banks of Australia kept buzzing in news as they were expected to follow RBA’s trail to increase rates. CBA, ANZ and NAB are expected to lift their interest rates on deposit accounts and in their home loans.  CBA, ANZ, NAB and WBC shares closed Wednesday’s trade slightly higher. 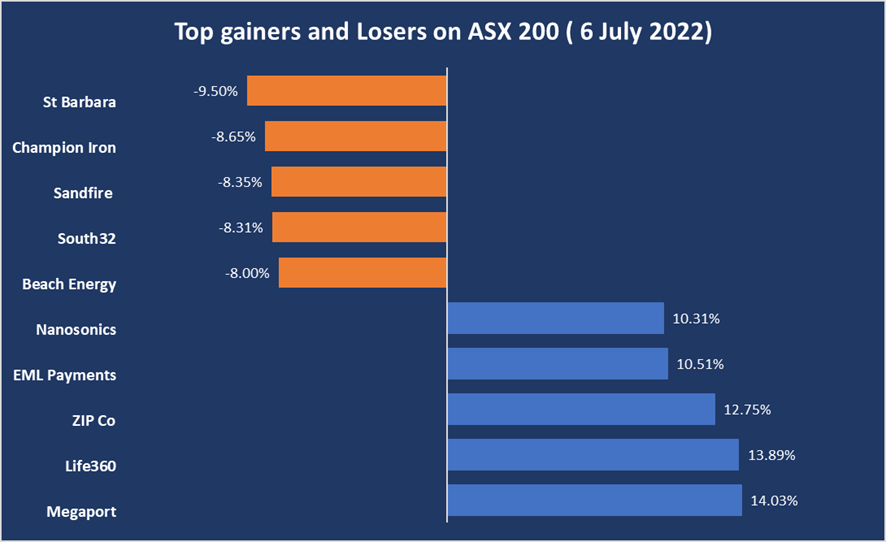 Globally, investors are still worried about possibilities of a global recession on the back of a monetary tightening across economies. Another influencer is the looming energy and material demand supply gap in Europe due to the Russian invasion of Ukraine. In the US, investors are awaiting minutes from Fed’s June meeting. In Asia, stock markets were looming lower. Japan’s Nikkei was down alongside South Korea’s KOSPI. In China, mass testing began in Shanghai for Covid-19 after detecting new cases. These increased concerns of new lockdowns are likely taking the Chinese Shanghai Composite and Shenzen Component index down. Hong Kong’s Hang Seng also closed lower on Wednesday.