Dividends across the global market have been on an upward trajectory for quite long time with Japan adapting the dividend culture and Asia-Pacific demonstrating the strongest dividend growth. Australia has been the major contributor in fuelling the global headline growth rate on the back of the mining giant BHP Group declaring large special dividends.

What is a Dividend?

The dividend represents a distribution of a reward stemming from a company’s earnings to its shareholders. In the world of income investing, a dividend is the soul of investment that allows a regular income to investors on their capital. Generally paid in cash payment, a company may decide to pay the divided through the issue of its shares to shareholders.

Dividends are crucial indicator of company’s health. The roots of the dividend rate and interval cycle are deeply connected with the company’s earnings growth. Nevertheless, at times, companies make dividend payments even when they are not running in profits with the objective to maintain their established track record of paying regular dividend payments.

Global Dividends have made a strong head start in 2019 with the United States and Canada breaking the all-time quarterly records. Despite the considerate degree of adversity in the macro-economic environment, global dividend payout grew 7.8% to a first-quarter record of US$263.3 billion, according to Janus Henderson.

Asset Manager, Janus Henderson, analyses dividends performance of the world’s largest 1,200 companies by market capitalisation and presents it through its ‘Janus Henderson Global Dividend Index’ (JHGDI), a first of its kind. The JHGDI has spiked up to 190.1 in Q1 2019, reflecting that global dividends are now almost twice the level they were a decade ago when the index started in 2009. 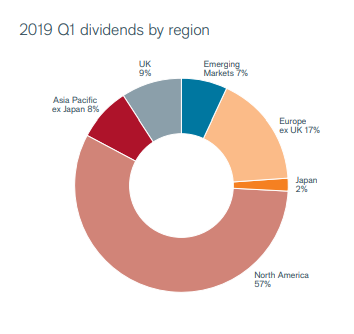 The top three contributories to the global dividend growth include Asia Pacific region standing at the peak with 14.7% rise in Q1 2019 compared to Q1 2018, UK taking the second position with +10.5%, and Europe ex UK up 9.2% year on year. More importantly, North America has delivered the fastest underlying growth in the world with US banks making the strongest contribution to it. It translates an 8.3% growth in US Dividends to US$122.5 billion, an increase of 9.6% on an underlying basis, while Canadian Dividends jumped 12.0% on an underlying basis to a new record.

Asia Pacific ex Japan region’s dividend growth was dominated by Australian payments that had the special dividends distributed by BHP Group Limited (ASX: BHP) to its shareholders. Almost half of the total special dividend came from BHP which distributed the proceeds received from the sale of its US shale oil assets to the holders of its Australian and UK-listed shares. The total special dividend was US$13.4 billion increasing the headline growth rate by four percentage points in the first quarter of 2019, as per JHGDI.

On the downside, emerging markets remained weak due to the impact of tighter US monetary policy and global trade concerns. Headline payouts fell 6.1% to US$16.2 billion but were 2.2% higher on an underlying basis on the harness of favourable performance of India. In the Europe region, Q1 witnessed just few dividend payments, recording headline growth of 9.2% underpinned by special dividend. France and Italy outperformed their peers, but weaker European exchange rates reduced the dollar value of payouts.

In Q1 2019, Australia achieved a dividend growth of 5.4%, driven by the larger dividends from commodity companies, as per Janus Henderson report. The major contribution to growth came from Woodside Petroleum and BHP Group Limited. However, in the busiest block of reporting season, it was recorded that just ~55 companies raised their dividend which indicates a sign of reduced confidence in the future outlook.

Telstra cut its payout again while the largest payer Commonwealth Bank held its dividend flat following the recent trend in the wider Australian banking sector. In the cross-exchange comparison it has been recorded that ASX-listed banking sector stock, Commonwealth of Australia (ASX: CBA) has returned an annual dividend yield of 5.32%, almost double the annual dividend yield of Nasdaq-listed Bank of America (Nasdaq: BAC) which is 2.18%, as at 12 June 2019.

Australian Dividend and Franking Credit (Imputation) rules were scrolling the headlines in 2019 Australian Federal Election. Unlike other parts of the world, dividends paid to shareholders by resident companies in Australia are taxable. However, under the Australian Dividend Imputation System, some or all part of the corporate tax paid by the company on its income could be attributed to shareholders in the form of tax credit/franking credit, which subsequently reduces the income tax payable on a distribution to avoid the cascading effect.

After the win of Scott Morrison-led National Coalition Party in 2019 Australian Federal Election, ASX-listed banking sector stocks zoomed as the re-election of Scott Morrison government has ensured that there would be no scrapping of franking credit and change in other banking policies as proposed by opposition Labor.

Janus Henderson anticipates a record US$1.43 trillion in dividend payments in 2019, up 4.2% in headline terms, or 5.2% on an underlying basis. It confirmed no change in 2019 forecast as higher special dividends are offset by the strength of the US dollar.