Matsa Resources Limited (ASX: MAT), a gold explorer, announced on 7th May 2019 that the company received the Diamond and Reverse Circulation drilling results at Fortitude North. The company drilled one diamond drill hole and five reverse circulation drill hole at the prospect, which is within the companyâs Lake Carey gold project in the Eastern Goldfields, Western Australia. The company recently commenced drilling at Red October Gold Project.

The drilling program was designed to test the northern end of a 1.8km basement gold anomaly and was planned on three sections, including section three or the southernmost part of the gold anomaly, at which the company encountered significant results previously. The previous significant results from various types of drilling such as Aircore and Reverse Circulation includes :

The company intersected anomalous gold of value greater than 0.1g/t of gold in all the drill holes; however, the best intersection was provided by the section 3. The significant results from section three includes:

This higher grade of 8m @ 2.94g/t Au from diamond drill intercept is estimated as a downdip extension of the mineralisation intercept found at the drill hole, which was identified as 19FNRC05.

The drill hole intercepted 6m @ 1.91 g/t of gold from 90m. The company previously estimated the presence of a moderately ENE dipping gold mineralisation zone and the results from section three supported the companyâs estimation.

Further results are as below: 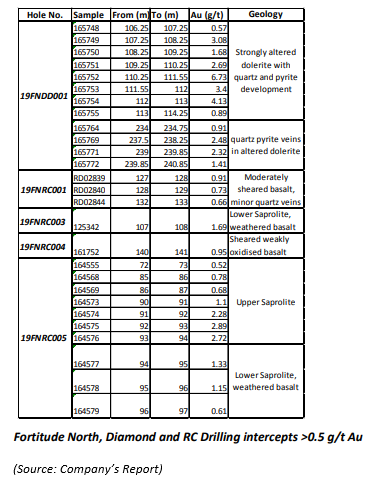 The prospect is in Kurnalpi terrain, which hosts world-class gold deposits such as Sunrise Dam, Wallaby, etc., which in turn, increases the potential of the prospect. So far, the company tested only around 20% of the 1.8km long basement gold target at the prospect, below aircore refusal. As per the company, the distance of 1.5km south of the current drilling requires deeper drilling.

The current program which included one diamond drill accounted for 321.4m and five reverse circulation drill, which accounted for 911m.