Amongst various sectors listed on ASX, Information Technology and communication services were the top performing sectors delivering a growth of 1.067% and 1.882%, respectively.

On the other hand, sectors like utilities and banks were the worst performing sectors, which dropped by more than 1.5% each by the closure of the market.

Amongst the top five gainers for the day, Nine Entertainment Co. Holdings Limited (ASX:NEC) reported a 5.084% growth in its shares, driven by the trading update released by the company, highlighting significant improvement in FTA advertising market and Nine’s share of that market. The company expects its December 2020 quarter to show growth in Metro FTA advertising revenue of ~ 15%.

Next on the list of the top gainers for the day was Eagers Automotive Limited (ASX:APE), whose shares notched up by 4.803%, probably influenced APE’s announcement related to agreement to acquire a Castle Hill property.

Pendal Group Limited (ASX:PDL) was the top loser for the day with 5.495% drop in the shares. Whitehaven Coal Limited (ASX:WHC) was next in the list of top losers with a drop of 4.49% in its share price.

Let us look at the top five best performers and losers for the day. 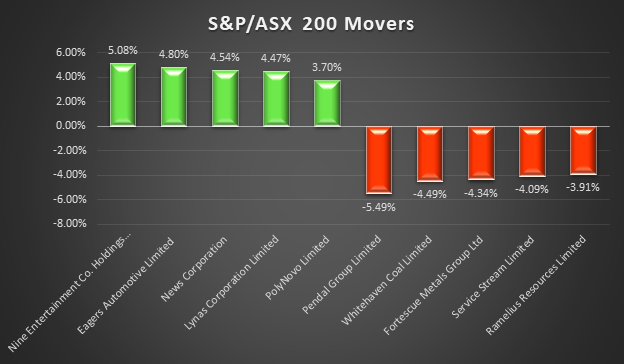