Global media and marketing company, Crowd Media Holdings Limited (ASX: CM8), formerly Crowd Mobile Limited, has been undertaking a strategic review of all the aspects of its business, streamlining its operations and undertaking cost reduction initiatives, which initially identified a $1.5 million in annualised operational and corporate cost savings, expected to be executed before 30th June 2019.

It is expected that the aggressive cost-cutting measures implemented by the company will result in an estimated annualised cost savings of $3.5 million in FY19 and will eventually help the company to move back to profitability from 1st July 2019.

In the recent redundancy round, the company reduced $1.4 million in annualised costs associated with employment costs, with a reduction in 50% of the middle and senior management, which includes the COO, GM and other management positions. Identified employees in the redundancy round will most likely cease employment prior to 30th June 2019.

In FY19, Crowd Media division is expecting to earn revenues of around $1.7 million, which is 240% higher than the previous year. The media division is progressing well with the recently executed pilot agreement with one of the largest digital wealth companies in Europe, Moneyfarm.

As per the terms of the agreement, the media division will help Moneyfarm (MFM Investment Ltd) in promoting its investment services via the company’s proven digital influencer strategy. The initial contract is for a period of one month and the contract will not have a material effect on the overall revenue. In addition, the company has launched a revamped media kit, reflecting the shifting focus of Crowd Media to the large and growing digital influencer and social media marketing sector.

In FY20, the Crowd Media division will put more emphasis on delivering globally competitive social media and digital influencer campaigns to clients in order to generate material revenues with strong year-on-year growth. For the same time period, the Crowd Mobile division will first stabilise and then focus on growing its revenues and profits again across its businesses. With a strong emphasis on reducing the costs, the company intends to achieve positive EBITDA and operating cash flows in FY20.

These agreements demonstrate Crowd Media’s ability to service brands in continental Europe across multiple languages and digital media platforms like Facebook, Instagram, Snapchat and YouTube, leveraging its expertise and assets originated from the mobile division.

Collectively, these agreements reflect the momentum of the company’s Crowd Media division. Although this division is in its infancy (generating less than $2 million annually), the company believes that it is the future cornerstone. Consequently, adding well-known brands that underscore the company’s approach will contribute to the future success of the Media division and its ability to grow and be a material contributor to the revenue.

The financial year 2018 marks the beginning of the company’s transition from a product centric company to a platform company, focused on the growing digital media and influencer sector. In FY2018, the company delivered stable performance within the Q&A and Subscription division. The Q&A division, a global network that connects those seeking answers with experts, ended FY18 with revenues of $24.7 million while the company’s Subscription division, which delivers mobile content such as games, apps and video to millions of customers worldwide, achieved revenues of $13.3 million. 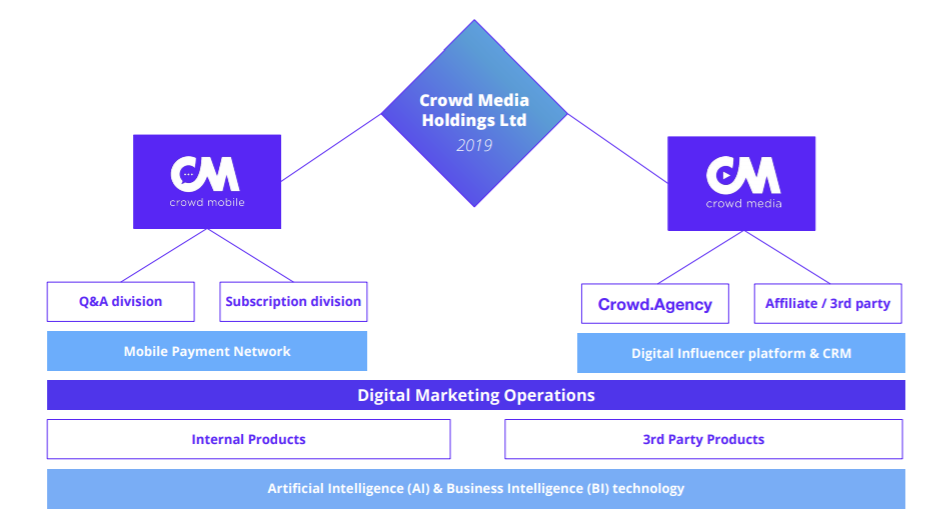 The company’s new division, Crowd Media, is focused within the growing digital influencer sector – the only one of its kind run by an Australian listed company.

The company recently published a cleansing notice stating that it has executed Convertible Securities Agreement with Obsidian Global Partners, LLC (Investor), an unrelated third-party sophisticated investor on 6th June 2019. Under the agreement, the investor has agreed to invest up to $1,500,000 across two tranches, in return for which the company will issue the investor or its nominee convertible notes.

The principal effect of the issue of the convertible notes on the structure of the company will be to (1) Increase its cash reserves by approximately $750,000; (2) Increase its indebtedness by the amount of the aggregate face value of the Convertible Note (US$525,840), plus all accrued and unpaid interest as applicable; (3) Increase the number of shares on issue as a consequence of the issue of shares on the conversion of the Convertible Notes (either in whole or in part).

Read More: CM8’s Shares Uplifted On ASX As It Undertakes Refinancing Of Its Debt Facility